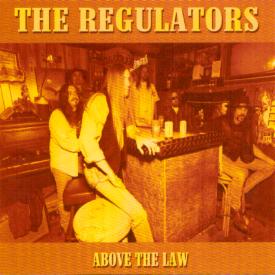 THE REGULATORS
ABOVE THE LAW
Released 2002 (Record Heaven)

Production:
Produced by Juan Crucier and The Regulators, except track 7 produced
by Randy Smith.

Review:
The Regulators have never sounded so good! Releasing a killer collection of
southern rock, the album as a whole is almost too heavy to be pigeonholed in that genre.
This album is straight ahead guitar rock with a heavy blues influence. Essentially
Above The Law is a European reissue of the band’s 1998 disc Bar & Grill
with a different mix.

At times the band sounds a lot like the Arc Angels, even down to
vocalist Ronnie Farrell, who could be considered the gruff voiced equivalent
of Charlie Sexton. Standout cuts include “Breakin’ Out”, “Eatin’ Crow”,
“My Bags Are Packed” (the closest the band comes to traditional southern rock, including
the boogie piano sound) and the almost eight minute tribute to Jimi Hughes “Sweet
Sustain” (did he really help remix this song from the grave??). The best tune on the entire disc though is “Above The Law”,
where the guitars are allowed to run wild for an incredible sound. But the guitars
really don’t let up thru the entire record.

This is the type of music that inspires a guy to invite his rowdy friends
over for a beer and a BBQ. It’s not fancy and it’s not cute, it is just great
unrelenting hard southern rock. Check the band out at www.theregulators.com