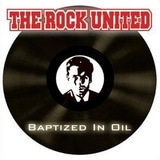 THE ROCK UNITED
BAPTIZED IN OIL
Released 2008 (The Rock United)

Review:
I get this gut feeling that I’m going to be about the only person that loves The Rock United. From Sweden comes a band that sounds out of this world, a band that has a sound all their own and seems content in doing their own thing. They remind me of a little known band named the Masters Of Reality in that regard, not in sound, but in how they deliver themselves. The Masters Of Reality named themselves after a Black Sabbath album to piss off punk rockers and then proceeded to play music that didn’t fit comfortably within any genre. The Rock United, while a rock band, have that same ‘square peg in a round hole’ quality to the music they play.

One minute you get strange Oak Ridge Boys inspired bopping on “Highspeed Cruising” and the next you get the fa-fa-fa-fa-fa of “Kingwagon”, and it really does make for an extremely odd yet enjoyable ride. Throw in a slight hint of flamenco on “El Loco Punkorocko” and the easy-going vibe of the anti-authoritative “Law And Order” and it seems like The Rock United‘s minds are like a disco-ball, with each light being a thought shooting in different directions and the band trying to capture each one.

If it is straight-up rock you’re looking for these guys deliver that as well as shown on “Too Young For Stockholm City”, “Indestructible”, “Sympathy For The Rolling Stones” and “Cockfighter”. The later has to be singled out for the lyrics alone, “cockfighter I want to be like you, cockfighter I want to swing my cock too.” That’s one of the things I love about The Rock United, that their lyrics are as off-the-wall as the music they play. Even when they are singing about “Jolene Must Die”, referring to her as a bitch, they do it with such a tongue-in-cheek delivery that you can’t help but laugh! Only a band like this could get away with a song title such as “Love At The Daycare Center”.

I sometimes get the feeling that unique music really is a thing of the past, at least great unique music, but once in awhile a band such as The Rock United will come along to restore my faith. Not to mention I think this band has one of the best vocalists in hard rock today. After praising The Rock United‘s debut album I await your emails telling me how screwed up I am…maybe I’m as screwy as the band themselves?