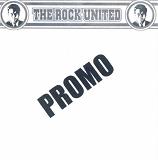 Review:
Back in 2005 I named The Rock United‘s “The Devil Speaks Swedish Tonight” as the best song of the year. There wasn’t a song released that year that I spun louder or more often, and the gruff vocals absolutely floored me. Vocalist Fredrik Risbo had a guttural growl that was tailor made for sleazy music.

Since that time things have been relatively quiet with this Swedish quintet. I’ve anxiously awaited new material from the band, and I finally got some. Sadly I only received a three song promo, I was hoping for a full-length release from these ‘rough around the edges’ musicians.

This promo flies fly by faster than The Flash running the Boston marathon. “Highspeed Cruising” and “Indestructible” both clock in at under two minutes! They are both short bursts of attitude driven rock. The band still sounds mean, even with the doo-wap backing vocals on the opening cut. “Indestructible” lives up to its name, even paying homage to Motorhead’s Fast Eddie Clarke. But the best is saved for last with “Too Young For Stockholm City”, as this song sways and swaggers for over three minutes (which makes it an epic for these guys!),

The verdict is that The Rock United are still a great band capable of releasing some great music. But I already knew that, so lets get a full-length CD released so that us music fans can listen in amazement to one of the best voices in rock music today.