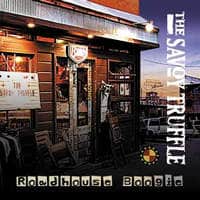 Review:
I reviewed an album by The Savoy Truffle a couple years ago and now they have returned with a brand new release. After all this time, the thought of a Japanese southern rock band still strikes me as odd as it originally did – is there actually a market for this in Japan? One thing is for sure, you have to give the boys credit for sticking to their guns.

Even though I call these guys southern rockers, they are not afraid to push the genre’s boundaries with funky bass lines and intricate percussions. But the mish-mash of tribal beats, funk-laced bass, slide guitar and southern twang vocals doesn’t always work – and the group comes across as one of those bar bands that are playing background music while you and your buddies shoot the shit over a few beers. Toshihiro Sumitomo once again lays down some great guitar solos (check out “I’ll Never Know” for proof), but at the end of the day few songs stick out and grab your attention – by the time “Bring You Down” rocks out, it is far too late to save the album.

I can’t figure out if The Savoy Truffle is a band mixing together different styles in an effort to find its own identity or if they are just a southern/blues rock band that refuses to be pigeon-holed. Regardless, a few killer solos and harmonica parts don’t make an essential album, and there is just too much mid-tempo mediocrity here to keep me entertained. It is in fact Roadhouse Boogie, but if I was at that roadhouse I’d be paying more attention to the girls in short skirts or the billiard game then the band. www.live-indies.com/savoy.html.