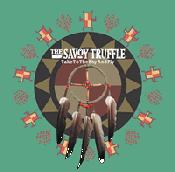 Production:
Produced by The Savoy Truffle.

Review:
Now here is something I never would have imagined, a Japanese southern rock band!
The Savoy Truffle may not have mastered the southern rock genre yet, but they
give it good try.

The foreign boys seem to have listened to a lot of Allman Brothers
music in their formative years. Vocalist Monji Kadowaki occasionally sounds like
Deep Purple‘s Ian Gillan, at times his vocals seemed forced, but his style
grows on you with repeated listens. Guitarist Toshihiro Sumitomo never lets up
throughout the entire album (typical of this genre) and is allowed to shine on the
thirteen plus minutes of “Brother To Brother.” Stand-out tracks include “Change The
World In Me”, “Why Live For Dying?” (with it’s harmonica addition) and “Feel So Bad”.

The band has a good grasp of the blues, while sometimes implementing a funky
bottom end. It’s southern rock for sure, but not generic. Check the boys out at
www.live-indies.com/savoy.html
and hear what could very well be the first Japanese southern (or should it now be eastern?)
rock band.