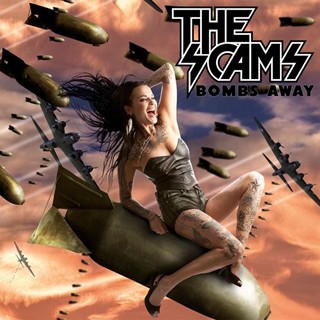 Review:
The Scams, a ‘stripped down’ Swedish rock band, have created a dirty rock album called Bombs Away that mixes classic riffs with some new-school punk.

“Thrill Is On” and “I’m Not Alone (Got Rock N Roll)” are the first two tracks on Bombs Away, and also the strongest. “Thrill Is On” grooves and sounds like Ozzy Osbourne in a good way (the way I wish Ozzy‘s music would sound today) — the lyrics ‘Let’s get the party started’, and also the fast guitars, hit the first song checkpoint for starting off the album blazing (and setting the tone for a wild ride). “I’m Not Alone (Got Rock N Roll)” has a very original sound and sticks in your head, like all great hooks do. Here, during the first two songs, we see The Scams growing — incorporating a more bluesy/punk aspect to their classic sound.

“Heavy Load”, “Get Up And Move Along” and other tracks on Bombs Away have a heavy AC/DC vibe that is often associated with The Scams (see also Bullet, Airbourne and ’77), but the fact that they ‘own’ it seems to make this okay. “Pour Me One More” is probably the biggest ‘anthem’ type song on the record that should play well in pubs and, if lucky, arenas. Another treat on the band’s third release is the song “Back In Hell” — starting off slow with vocals over a drum line, followed by guitars crashing into the chorus, it becomes a lesson for all in debauchery.

As a whole, Bombs Away feels like a crossover album. You can hear the vintage sound of The Scams, but also see where they are heading, and after listening to Bombs Away I want to go see this band live. This record is fun, full of energy, and not too serious — just rock and roll. As stated before, with Bombs Away The Scams are growing as a band and taking risks in areas that are paying off.