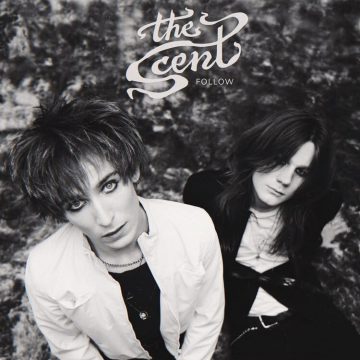 Review:
The so called “Nash-Aussian” band (Nashville via Australia) The Scent is comprised of vocalist Kurt Lowney and bassist Mika Nuutinen. The two long-time friends were the backbone of KAATO, who released a self-titled album in 2016, and a follow up Slam! in 2019. Sleaze Roxx interviewed the pair in August of 2019 about Slam! and the band’s fall out with Mitch Malloy.

Full disclosure, I’ve been a huge supporter of KAATO since their first album, and did both reviews and interview. I got to know both Kurt and Mika a bit and they seem to be pretty good guys, so it was sad news then when in October of 2019, Sleaze Roxx reported that KAATO was on “indefinite hiatus” after an eight year run. When I checked in with Mika back in late October 2019, and again in June 2020, he essentially told me that there’s no bad blood anywhere, and that he and Kurt wanted to try a little different direction.

I wrote of their first album, “This is a good time album with the swagger to lighten up any party mix. Give it a chance!”, and of Slam!, “I have honestly really enjoyed this album. Slam! is simply a fun listen from start to finish.” That was the type of band KAATO were, and I was pleased to support their modern hair band style of good-time rock and roll. Now, under a new moniker, The Scent have changed direction somewhat. Lowney’s vocals are still as strong as ever, and some tracks are a bit different from KAATO’s production.  Opening track “LA X NY” is a tad heavier sounding, with some good guitars. Lowney has chosen a lower vocal register for the verses, and more restrained overall. “Canyon Blues” has a cleverly written opening riff and an understated intro. It’s essentially a slow-mo blues stomp with a decent hook. I do like it, but I think The Scent could also do better.

“Dry Sherry” is very much old style KAATO. Perhaps the sound and production are different, but this song could fit into the back half of either of the band’s previous releases. That’s not a knock on the song. It’s listenable and well done. Now, the band’s first release from this EP is “Popstar”, which is very much a departure from the past. It’s dark and lyrically focused. This is the stylistic change I assume Mika was referring to in his e-mails to me. Not my first choice for a debut release, but sure. To close out the EP, “Don’t Ask Me” shows off a ton of Mika’s bass skills with funky-bass driven verses, and a bit of sing along chorus. No doubt with a bigger production budget, they could have hit the Extreme or Electric Boys level of metal funk-alicious. Really, I can’t complain about how “Don’t Ask Me” turned out.

As I said above, I really like these guys and what their talent has produced. I am very happy they’re back creating and releasing music. I only wish I could give this five song EP full marks because it shows a whole lot of potential. However, even as a long time fan, Follow only had a few tracks that really held me. That said, to Kurt and Mika, keep going, you’re always a good listen, and I can’t wait for the next one! You can listen to Follow by The Scent on Spotify, or purchase their album through their website.