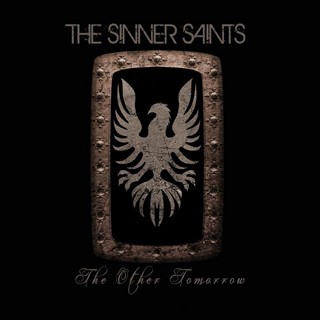 THE SINNER SAINTS
THE OTHER TOMORROW
Released Augsut 21, 2012 (The Sinner Saints)

Review:
The Sinner Saints are a fresh new band from Atlanta, Georgia that proudly display their southern roots on their debut album The Other Tomorrow. However I don’t mean Molly Hatchet type southern rock, instead these guys are like Black Stone Cherry or a rootsier Hair Of The Dog.

The whole southern influenced modern rock is displayed right from the start during the album’s debut single “Stone Dead Drunk”, a straight-forward boot-stomper that shows The Sinner Saints at their best. Following right behind is “Long Way To Go”, a similar sounding number that is carried along by a cool guitar riff. “Murder In A Dress” could be the band’s most accessible song — it’s not their best work but changes tempo throughout and has a few different sounds going on. Ending the disc is “Ain’t It Tragic”, a heavy War Babies type rocker that closes the disc on a high note.

The Other Tomorrow does get a little strange in places, beginning with the dreamy ballad “Supersonic Love Breakdown” which never seems to get its footing. The two covers, Cheap Trick‘s “Auf Wiedersehen” and The Rolling Stones‘ “Let’s Spend The Night Together”, will more than likely leave fans of those two bands a little cold and probably would have been better off on the cutting room floor (which they almost were considering they only appear as bonus tracks on the deluxe version).

Oddly enough The Sinner Saints also moonlight as a Bon Jovi tribute named Slippery When Wet, but that is hard to envision while listening to this album because there is nothing glam or hair metal about it. In fact, picturing Jason Morey‘s boozy bark singing something like “Bad Medicine” is a very big stretch — he must be some sort of musical chameleon. Back on topic though, while The Other Tomorrow is rather unfocused at times, The Sinner Saints have shown enough moments of brilliance to garner another listen on their next effort.