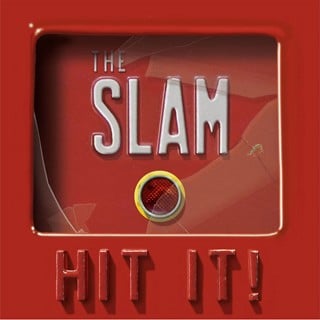 Review:
Canadian raised Serge Simic is the brain behind newcomers The Slam, and what a debut effort he has delivered with Hit It! With soulful vocals and a hard hitting back end, The Slam should quickly become a hard rock band to keep an eye on.

Anyone who has read this website for awhile knows of my love for Little Caesar and the distinct vocals of Ron Young, which explains why the opening tack on Hit It! immediately caught my attention. “Wild Ride” would have fit like a glove on Little Caesar‘s Influence release as the song has that same bluesy hard rock feel to it. “Bad Blood” is much the same but offers a heavier edge, not unlike what Hair Of The Dog attempted a decade ago with their modern take on an old sound. Then comes “Tears In The Rain”, a song that doesn’t immediately grab your attention but comes together nicely during the chorus — it really is tailor made for modern-rock radio. “Kisser” on the other hand reminds me of another Canadian band named Stampede Queen with its foot-stompin’ beat, tongue in cheek delivery and KISS inspired riffs. Meanwhile “Push On” and “Saddle In The Moon” are two tracks that Danko Jones would be proud to have in his arsenal.

For publicity sake (or so I am guessing) the ‘Voice of Rock’ Glenn Hughes takes over on lead vocals during the song “Little Angels”, but to be honest he isn’t needed because Simic‘s delivery is every bit as strong as Hughes — maybe even better! But if the inclusion of Hughes convinces a few more listeners to give The Slam a chance it’s all worth it, because this new group deserves to be heard by the masses.

I have to say that Hit It! is a very impressive debut album. It offers a bit of the blues with ample amounts of hard rock, but really it is Simic‘s voice that sets The Slam apart from new bands attempting the same sound — he has a delivery that conjures up images of hard rock’s elder statesmen. And when you mix the voice with strong musicianship and well-written songs you get a winning combination.