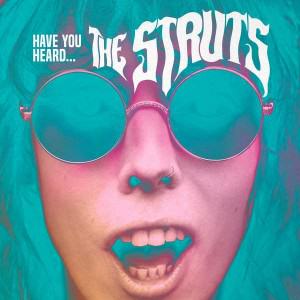 Review:
Could The Struts be the next great rock and roll band? Nikki Sixx apparently thinks so. And who is that dude on the cover of The Struts‘ album Have You Heard…? Is that Mick Jagger or Steven Tyler? Neither actually, but it’s The Struts‘ lead vocalist who quite possibly is the love child of Jagger and Joan Jett with the transplanted vocal cords of Freddie Mercury. An interesting character to say the least. The young singer’s influences may be so deeply rooted in ’70s classic rock that when asked who his parents would be if he could go back and choose them, lead singer Luke Spiller replied “Elton John and his husband”.

It’s tough to pin down an exact sound description for The Struts. “Everybody Wants” is a bit of a mash up between classic rock and modern indie rock. What I’m not sure of is whether the band made a conscious effort to throw in an indie influence so as to not be lumped in with a complete throwback to 1970s classic rock and to come across as being “current.” Listeners will however also find a heavy Queen influence on tracks such as “Where Did She Go” and “Could Have Been Me.” While not completely drenched in the sleaze genre, there are a few tracks that stick out to catch Sleaze Roxx readers’ attention. “Kiss This” is an extremely catchy sing-along anthem about breaking up, and “Put Your Money On Me” is as catchy as anything from Cheap Trick‘s heyday.

We have some high hopes for this band to bring rock back to the mainstream and to the masses. Signed to Virgin Records, the band was temporarily moved from their hometown of Derby England to Los Angeles. From there, Interscope re-released their actual full length European debut Everybody Wants as this four-track EP Have You Heard… in North America on Interscope Records. Being a rock band signed to Interscope Records already has our warning bells ringing however, as this label is run by the great rock denouncer Jimmy Iovine. Iovine has a history of disuading American Idol contestants from performing rock songs and also booted The Pretty Reckless from his label.

Having however already opened for The Rolling Stones and playing numerous festivals in the UK the last few years, we may still witness The Struts being the next big thing, and it’s about time.

Performing at The Isle of Wight Festival 2015