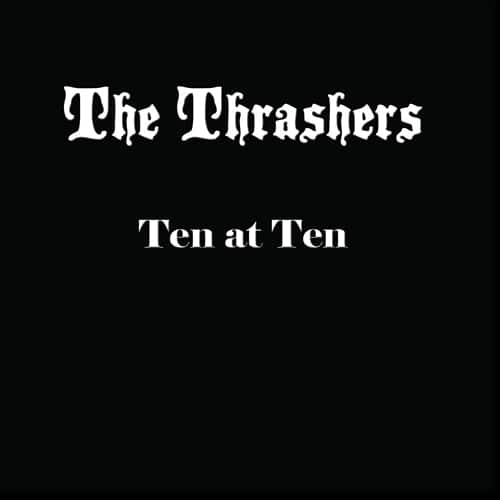 Review:
There are a few seasoned musicians who should be holding their heads in shame right now… because they have just been shown up by a group of kids! And when I say kids I’m not exaggerating — The Thrashers are a group of 10 year olds who met each other at daycare, formed a band, and are about to unveil their debut Ten At Ten.

The musicianship of the band is amazing for their age — not since Bad 4 Good in the early ’90s have young boys sounded so skilled. Hooking up with Sunset Strip veteran Brent Turner has also been a blessing for The Thrashers, as his former involvement with Frank C. Starr explains the album’s opening cover of The Four Horsemen‘s classic anthem “Rockin’ Is Ma Business”. The Thrashers‘ version of that song stays true to the original and brings a smile to your face because the swear words are removed and especially when singer Nick Rigling convincingly screams “that’s me” after the line “shakin’ their thing at every rock ‘n’ roll star”.

The album’s first single “Rock Me Roxy” is another cool track and shows that these tots are more than capable of writing their own songs. “Devil’s Slide” has a very heavy crunch to it while the short “Black Fire” rumbles along with a “Train Kept A Rollin'” vibe. Like any youngsters, the guys in The Thrashers do lose focus occasionally — “Follow” is just too punk, “Streets” just doesn’t work at all with its strange keyboard additions while the gravel throated vocals and annoying chorus on “Soldier” seem out of place. “Steppin’ Stone” closes Ten At Ten and finds the boys capitalizing on their strengths again and contains some fine guitar shredding.

Forget that old slogan sex, drugs and rock ‘n’ roll… this is puberty, chocolate milk and rock ‘n’ roll. Consistency may not be The Thrashers strong-point (yet) but these youngsters have all the tools in place for a long and bright future. Look for Ten At Ten to hit stores in early 2011… shortly after the band finishes their homework and wake up from their nap!