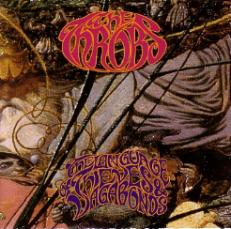 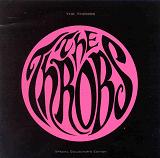 THE THROBS
THE LANGUAGE OF THIEVES AND VEGABONDS
Released 1991 (DGC), 2007 (Rock Candy Records)

Review:
The late 80’s/early 90’s produced quite a few bands which didn’t gain the success they deserved and whose albums are considered to be lost classics. If you read through the liner-notes of this once again beautifully done Rock Candy reissue, you’ll get the impression that this would be the case with The Throbs‘ sole, long out of print release. Signed to Geffen, they were considered to be the next Guns N’Roses, but stardom never struck and a band-life full of decadence led to the group’s early demise.

Listening to The Language Of Thieves And Vagabonds now, you won’t be surprised that this band just couldn’t last long. These 11 tracks (two of which are previously unreleased demos) are sleazy rock songs which are heavily influenced by drugs, living on the streets and of course the Rolling Stones. Just listen to The Throbs “Honey Child”, which sounds like an unofficial follow-up to the Stones “Wild Horses” or the rocking “Ecstasy” and you’ll get the idea.

Much like other bands back then such as The Quireboys or The Dogs D’Amour, these guys didn’t want to get a piece of the pie of the hair metal pie, their goal was to make a timeless Rock’n’Roll classic. And what can I say now, 17 years later? Well, yep, they managed to achieve that! Thanks to the remastering, The Language Of Thieves And Vagabonds still sounds fresh, gritty, and most of all, honest. And while in my eyes this album still is over-hyped, it sums up what true Rock’n’Roll is all about. Now what about that second unreleased album?