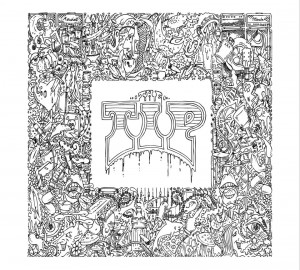 Review from Terry Martinson:
Hailing from the country music capital of the known free world, Nashville, Tennessee, comes a band of miscreants (unconfirmed) re-incarnating that oh so delectable ’80s sleazy/bluesy/greasy rock n’ roll that was a staple for many back in the day but is an all but long forgotten memory for many today. I present for your aural approval The Tip.

Just as the name implies and from a quick look at the band, you’ll know that saints they ain’t, but proficient torch bearing purveyors of all things sex, drugs and rock n’ roll they are. The band was started in 2013 and by 2014, they released an EP entitled Killin’ It Wasted, which has demo versions of “More, More, More,” “Outta Control” and “Welcome To The Night.”

Before I had the pleasure of indulging myself in the entire long play, not just The Tip, and without hearing the EP, I saw a video for the song called “Welcome To The Night” — a raucous little rock n’ roll ditty dripping with sweat, swagger and sexiness. The tune is a solid one. It certainly got my attention and leads off the self-titled long play with a sound straight off of Baltimore, Maryland’s Kix 1983 release Cool Kids. Yes, cool is an understatement and yes, The Tip have earned the comparison and succeed in spades. The album plows ahead with the Salty Dog flavored, slide guitar rocker “All I Need.” “Outta Control” is a “jet” fueled rocker with lyrical content hearkening back to Motley Crue‘s “Kickstart My Heart” but without the omission of all the decadent treats a good ole down home rock n’ roller wants and needs to stay on point… and off we go from there. Relentless is the sound pulsing from my stereo as I delve deeper into this release. I’m smitten that’s for certain.

What follows are eight more delectable groove laden, up tempo and mid tempo, harmonica touched, key filled, guitar solo’d, lick infused, hide your mom, control your sister ditties that will nary disappoint, at least not these ears. Hell, there is even a saucy lil slow and low tempo’d number “L’ve Me Ev’ry Woman” in which Benny Carl screams his adoration for any and all things of the female persuasion. The album closes out with the soon to be cult classic in the making “Last Joint.” You will appreciate this homage to dangling furies everywhere. If you don’t know, then sorry I’m not spelling it out but the band name is a not so subtle hint. Certainly for fans of Salty Dog’s “I Don’t Remember, I Drank Too Much.”

In closing, The Tip are on my radar and should be on yours. The gang is proficient in recreating that vibe that could arguable be debated stemmed from Aerosmith or T. Rex or even David Bowie and then sparked the gleam and the dream in the eyes of a number of like minded rock n’ rollers. From the aforementioned Kix to Salty Dog to Tora Tora to Redd Kross to to to… you get the picture. Great great stuff here so please seek it out and tell your friends. The Tip are a great band doing what we all secretly want to do. They look as if they are having the time of their respective lives and they are looking absolutely ma’vahlous doing so! Here’s to the, what I am hoping is the impending release of, follow up to the self-titled album, which I will title “the shaft”. Sorry boys couldn’t help myself as I am sure you are all aware (or soon will be) the possibilities are endless both musically and in innuendo for The Tip.

Review By Greg Troyan of Lipstick:
Warning: Not only is this album explicit, but so is this review (It’d be pretty much impossible to review this band without an explicit content warning).

It’s only fitting that The Tip and Lipstick, two of Nashville’s most ridiculous glam-rock bands, shared a practice space together back in 2014. In many ways, our two bands parallel one another and are two sides of the rock n roll coin. Both bands are excellent rock n’ roll bands with badass riffs and singalong choruses, and both bands have very silly and ridiculous tongue-in-cheek lyrics. But while Lipstick may avoid lyrical subject matter like sex and drugs, The Tip sing about that subject matter almost exclusively.

The Tip are a band that oozes sexs, drugs, and rock n’ roll, but mostly sex. Almost every song on the album is about partying and getting laid, and in fairness to The Tip, that is what the band members spend most of their time doing.

Musically, The Tip are a blues based hard rock band, similar to Aerosmith but with a more contemporary feel. Benny Carl‘s vocals are similar to Steven Tyler‘s in terms of range, but he carries himself much more similar to David Lee Roth with his happy-go-lucky party antics. However, he has a snarl to his voice that makes it edgier than both vocalists, adding to the gritty and sleazy vibe of the album. Ricky Dover Jr., the band’s lead guitarist, adds a lot of classic rock sounding riffage to the album, with plenty of licks reminiscent of Ace Frehley and Mick Ronson. Dover‘s guitar playing gives the album a truly authentic rock n’ roll feel.

The songs are insanely catchy without sacrificing any rock n’ roll edge. The riffs on this album are fantastic, but The Tip are not just a riff-rock band. The Tip write full fledged songs with excellent vocal hooks on top of their badass riffs, and because of this, each track is memorable and excellent. While most of the songs are fast-paced, blues rock numbers, each song stands out on its own because the band knows how to write great material.

Some of the lyrics may come off as silly to the average listener. The lyric “I like sex because of the way it feels” isn’t exactly Bob Dylan, but I think that The Tip are in on the joke. For example, the song “Last Joint” is a song about a blunt, but the chorus of “It’s long/It’s white/And everyone wants to suck it tonight” is clearly a double-entredre about Carl‘s penis. It’s silly, but the band goes so over the top with its silliness that it’s hard not to love them. Just because something is campy and cheesy doesn’t mean that it is any less true. Lipstick believes in rock n’ roll, and The Tip have lots of sex. We may approach it in a silly and humorous way, but that doesn’t make it any less true to what we do.

The Tip‘s lyrics may be silly, but their music is not. This is a great rock n roll album! If you are a fan of ’70s and ’80s style hard rock — no matter what your favorite bands from those decades are — you’ll probably find a lot to enjoy about The Tip‘s debut album if you’re okay with really, really, really, really, really sleazy lyrics. If you’ve got a sense of humor about things or are living the rock n’ roll lifestyle as intensely as these guys, then you’ll find a lot to love here. This is easily one of the best debut albums I’ve ever heard. Though I may not personally agree with some of the lyrics, I can’t deny that The Tip are very, very rock n’ roll!

Reviewed by Greg Troyan of Lipstick and Terry Martinson for Sleaze Roxx, September 2015

The TIP “Welcome To The Night” HD Official Video