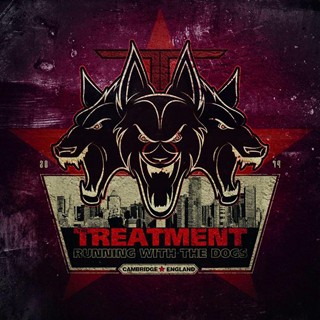 THE TREATMENT
RUNNING WITH THE DOGS
Released on February 3, 2014 (Spinefarm Records)

Review:
The Treatment‘s debut album, This Might Hurt, was a fantastic effort that found itself thrust onto the Sleaze Roxx Top 10 of 2011. The UK band’s follow-up, Running With The Dogs, completely blows that impressive debut out of the water — this time around the young rockers are meaner, nastier, faster and even more memorable!

It’s always tough for bands to top their debut releases, because they had their entire lives to prepare for it. That’s what makes Running With The Dogs so special, it is heads above the debut and even trumps the vast majority of music being pushed to overwhelmed consumers these days. If you’re one of those people that feel the hard rock needs a shot in the arm, look no further than The Treatment — these guys have all the tools in place to be the new kings of the genre.

Figuring out which tracks from Running With The Dogs to feature in this review is fruitless, and making my head spin. The album is such an exercise in perfection that naming individual songs seems pointless, but I’m gonna pick a few that have worn my finger to the bone from hitting the ‘repeat’ button on the CD player to give you an idea what’s going on here. The opening “I Bleed Rock + Roll” is a fist-pounding anthem that conveys The Treatment‘s dedication to their craft through sheer force. “The Outlaw” is another driving rock song filled with blistering guitar work and a memorable hook, while the thumping “Emergency” has such an infectious chorus that you’ll be singing along in record time. “Cloud Across The Sun” finds The Treatment slowing things down as they venture into modern day Tesla territory (not a bad thing at all) and “Don’t Look Down” offers the aggression of Airbourne for us adrenaline junkies.

Millennia from now when scientists use state of the art gadgets to dissect the appeal of hard rock music, they just may stumble upon Running With The Dogs for convincing evidence. Of course we don’t need gadgets to realize that The Treatment have released a killer album and are one of the most exciting bands to invade the rock genre in recent memory. Now someone get these guys a label deal stateside so they can conquer the world!