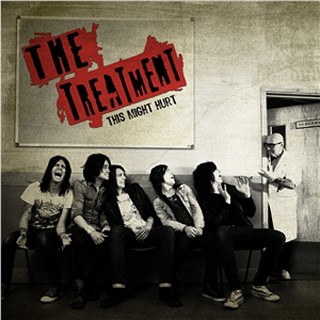 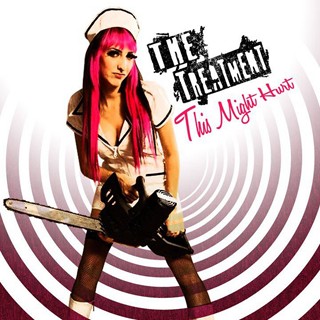 THE TREATMENT
THIS MIGHT HURT
Released on February 7, 2011 (Powerage Records)

Review:
The Treatment have unleashed one ass-kicking album in their debut This Might Hurt. Not bad for a band that only formed in 2008 and has already mastered the ’70s influenced hard rock sound that Cry Of Love found some success with in the early ’90s.

Right from the get-go with the first track “Departed” this disc is rockin’ all over the joint. After a few listens I’ve decided that This Might Hurt is simply full of good and reliable hard rock — and there is no better evidence of that than on what I consider is the best track, the loud and feisty single “The Doctor”. On this track singer Matt Jones (who at times sounds like Tesla‘s Jeff Keith) really puts his pipes into action and turns the volume knob up to 11 while the rest of the band prove that they are no slouches either.

As with a lot of debuts, This Might Hurt has all the energy you often find with a young band’s initial outing. The first three tracks are hard rocking ones, as are “Lady Of The Night” and “Shake The Mountain” later on, but the pace slows down a tad and moves into Black Crowes territory with “Just Tell Me Why” and “Winter Sun”. There is absolutely nothing wrong with that, as those songs are still good, but I would have preferred to have the harder edged stuff smeared over the entire disc because that seems to be what The Treatment excel at. “Nothing To Lose But Our Minds” also deserves a mention because it has a chorus that sounds a lot like Mott The Hoople‘s classic “All The Young Dudes” — so it is pretty catchy.

The Treatment have well written original songs, great musicianship and a fantastic vocalist. What makes them slightly more impressive is that these guys are pretty young — drummer started the band at the tender age of 15. Some of their older influences should give their left nut to have written some of these tunes and played them so well. Hopefully this talented bunch of young Brit lads gets the exposure they deserve and go ahead in leaps and bounds. If you want to sink your teeth into some full blooded rock, give The Treatment a spin.