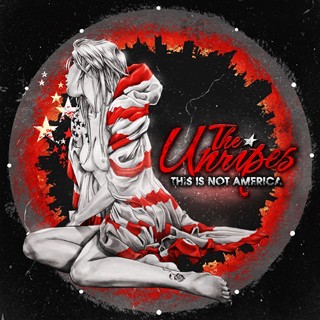 THE UNRIPES
THIS IS NOT AMERICA
Released December 10, 2012 (Street Symphonies Records)

Review:
The Unripes may call themselves ‘sleaze-core’, whatever that means, but in reality there is little ‘core’ and a whole lot of ‘sleaze’ on the Italian’s debut platter This Is Not America. A more appropriate term to depict what The Unripes are all about would be ‘Swedish sleaze’, not because they are from that Scandinavian country, but because they sound a lot like the Crashdiets and Hardcore Superstars of the world.

One thing that has plagued Italian bands in the past are vocalists with heavy accents, but The Unripes and singer Axia don’t seem to have such a problem. What the band do seem to have is a sense of humor, especially noticeable during the oddly titled opener “Track No 1”. While the song title may appear to lack any real creativity, the track itself is a great slab of hard rock that includes the type of guitar wankery that would make Yngwie Malmsteen proud. Even better yet is “Reload”, a full-frontal sleaze scorcher that kicks ass with its chorus that finds Axia battling with gang vocals.

After the disappointing “Get On This Rollercoaster” The Unripes come roaring right back during “You Are The One”, a mid-tempo song that finds Axia discarding the gruff vocals and proving that he can sing with hard rock’s best. “My Muse Is Called Rock’N’Roll” is another hard rocking number that perfectly resurrects the heavier side of ’80s hair metal, but my favorite on This Is Not America is “Scream If You Wanna Go Faster”. The verses are dark and moody and then the chorus kicks in and furiously propels the song over-the-top. I wish this track ended the disc as “The Star Beyond This Wall” tries way too hard at getting noticed on modern rock radio.

Overall The Unripes have released a pretty impressive debut, not bad considering they formed as a ‘one night only’ band back in 2005. If the band dumps their commercial aspirations, which rears it’s ugly head on a couple tracks, and the silly marketing concept of ‘sleaze-core’ The Unripes could evolve into not just Italy’s finest exports but also a top-notch sleaze band.