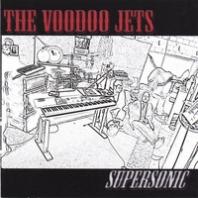 Production:
Produced by David Minehan and The Voodoo Jets. Mastered by Nathan James.

Review:
It isn’t often that I review an album this mellow, but it reminded me so much of Enuff Z’nuff that I figured fans of theirs would enjoy Supersonic as well. Also, The Voodoo Jets do have ties to the 80s rock scene – the band features drummer John Fowler who is best remembered for his work with Steelheart (and the over-the-top ballad “I’ll Never Let You Go”).

I got so caught up in the Beatle-esque melodies and harmonies of Supersonic that I completely missed a major point until reading the album credits – there is no guitar! That’s right, I’m reviewing a CD that is void of my favorite instrument. But I don’t care what the liner notes say, it sure sounds like there is a six-string on several tunes – was this done with keyboards or was there a phantom player?

There isn’t much point of going into details about the group’s sound, because as I stated earlier, if you like the dreamy trippy feel of Enuff Z’nuff you will love this release. “Radio”, the groovy “Wake Up” (John can still lay down a killer beat), “I’m A Virgin” and “Spaceman” all demonstrate The Voodoo Jets at their very best.

Supersonic isn’t sleazy, it isn’t hard, and you’d even be hard pressed to call it rock – but it gets the job done with some great songwriting. If you ever feel like getting mellow after a hard night of drinking and headbanging, this disc is for you.