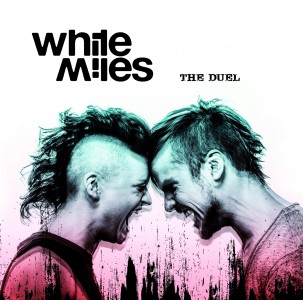 Review:
The White Miles are a duo out of Austria that are splashing across Europe with their unique sound of new sleaze and modern rock and roll. They aptly describe themselves as “dirty pole dance stoner blues rock” which I would totally agree with, dude. Medina Rekic handles the vocals and guitar, while Hansjörg Loferer-Lofi works the drums and backup vocals. I can only think of a few bands that don’t operate without a bass player. The Doors, White Stripes and Monkey Junk come to mind. No doubt there are some others. More often than not, the guitar player either tunes down, or works magic with pickups and the tweaking tech to get the low end more prominent on the recordings. I’m a drummer, so I don’t understand the magic of such things.

The White Miles have toured with The Answer, Courtney Love, and others across Europe to make a name for themselves.  Most notably, the White Miles opened the show for Eagles of Death Metal at the Bataclan Nightclub in Paris, France on November 13, 2015, the night of the terrorist attacks that killed over 80 people at that show. For obvious reasons, this shook the band to its core and they cancelled the remainder of the tour and they’ve been recuperating ever since. White Miles are currently putting together a tour for 2016 and beyond.

What I’m listening to is a great take on hard rock. “Crazy Horse” and “Insane To The Bone” are variances on a blues theme — one aggressive and the other a little calmer — but both with attitude.  “Sickly Nerves” shows off the vocal ranger of Medina, from a lilting songstress to a possessed demon. “In the Mirror”, “A Good Pennyworth” and “River of Gold” are interesting, and without logical comparison. Then we get to “Coke On A Jetplane” which is an acoustic trip, and more of a story than a song. “Heid” is mostly a spoken word piece over a neat little drum/guitar groove, but still a little to experimental for my liking.  To push further, the next track, “Don’t You Know Him” is totally spoken word, without the benefit of musical accompaniment. Speaking about this track, White Miles says, “This is a statement telling about a known person, not a friend. Questions and thoughts bring it to the point. There is nothing more to say, the shitfucker won’t  hear it anyways.”  I guess we all know someone like that….

The White Miles’ The Duel should be taken as a duel between heart and soul. Nobody loses or wins the battle. The band members constantly push each other, and they came up with an interesting and innovative album. It won’t make it to a Sleaze Roxx year end top list, but it is worthy of a listen.