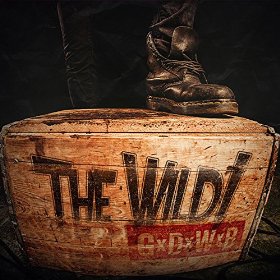 Review:
“Dude. Have you picked up The Wild!‘s CD?” my friend Mark would ask just about every time that I had contact with him. “Not yet. But I heard one song and it sounded pretty good” I would reply. Finally, Mark stated “Dude. The Wild!‘s record will be in your top 5 for the year.” Duly noted. As it turns out, it took a few more months before The Wild!‘s GxDxWxB would make its way into my hands.

How did my friend know that The Wild!‘s album would be in my top 5 for the year? One listen to GxDxWxB confirmed that this was a phenomenal record. Reckless fury — you got it. Unconventional — you got it. Scorching guitar licks — you got it. Great songs — you can bet your ass they have that. GxDxWxB — what kind of title is this? — kicks off with a nasty little guitar riff on “Party ‘Til You’re Dead” which quickly builds up into a nasty rocker that never lets up. Lead singer and guitarist Dylan Villain‘s singing on the opening track is somewhat unconventional but really cool! His vocal delivery during the verses of “Straight To Hell” would rival any sleaze rocker vocalist’s delivery.

After the first four kick ass tunes, The Wild! prove that they can play a slower sleazy yet bluesy rocker to perfection with “Slow Burn” which deservedly got the video treatment. Throwing Christine Vos‘ guest vocals at the end of the song was almost like a stroke of genius. The slow and bluesy paced “What About You” demonstrates that The Wild! could have an excellent career as an AC/DC cover band if things don’t pan out for them — but not to worry, the future looks very bright for the Canadian group. Most bands can mimic the faster paced AC/DC tunes, as we have certainly seen in recent years, but it is the slower bluesy AC/DC tunes that are tougher to emulate. GxDxWxB closes off with perhaps the best song of all — “Roadhouse” — and likely the song that got them signed with eOne Music Canada given that The Wild! released a video for the song back in 2012. It is trite to say that every track on GxDxWxB is a good one, if not a great one! There is absolutely zero filler on this release. Although GxDxWxB comes close to perfection in my ears, I do have a minor complaint about something unrelated to the release. Why in the hell would the group pick such a generic name as The Wild!?

What I like the best about GxDxWxB is that the songs have a lot of melody to them in their own special way yet have this sleazy hillbilly like fury to them, which makes them stand out. At the end of the day, my friend Mark’s prediction was slightly off. The Wild!‘s GxDxWxB won’t just make my top 5 albums of the year, it might just be at this time my top album for 2015!