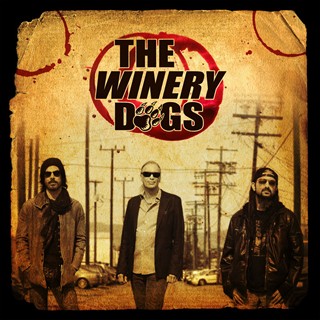 Review:
The Winery Dogs is a supergroup collaboration of Billy Sheehan (dubbed the Eddie Van Halen of bass), Mike Portnoy (former drummer of the prog-gods Dream Theater), and Richie Kotzen (a hidden gem of a guitarist). Supergroups tend to release albums with massive hype, but few of the albums are able to stand the test of time. Not everyone is Velvet Revolver, who have encountered their own critics over the years, and The Winery Dogs are not trying to be — they stand tall on their own, as their debut record displays how a modern power-trio rock ‘n’ roll album should sound.

One thing that stands out here is that the band’s technical mastery does not overshadow their great songwriting. After a few listens it seems obvious that the album’s main songwriter is Richie Kotzen, as the songs are reminiscent of his solo efforts. This debut album is definitely more in that direction than that of Dream Theater or Mr. Big (which Kotzen was a part of for several years alongside Sheehan). All in all I would describe the songs here as Kotzen power tunes, however the rhythm section is like none on any of his albums, and Portnoy in particular gives these songs some sonic muscle.

There is no possibility of naming all the standout tracks on The Winery Dogs. The tempo changes represented seem like heavyweights in the hard rock genre, whether they are ballads or straight in-your-face hard rock. You really can’t point a finger on any one song as all of them are top class.

The funny thing about this album is that it was first released in Japan on May 5th, and only saw a worldwide release on July 23rd (with one extra track). Such a gap wasn’t a good sign for the sales outside Japan, as everybody could either import the CD or just steal it off the internet. However, the surprise was that after hitting the worldwide market the album climbed all the way to the top echelons of the record charts, debuting at #5 on Billboard’s Rock Chart and #27 on the Billboard 200. The only reason I can see to explain this is that the quality of the songs is so great.

The Winery Dogs‘ self-titled effort in one of those CDs that I was really hyped to hear, so I was expecting to be at least a little bit disappointed by the final product. But there is really nothing weak about this album — all of it is just great music played by skilled musicians who clearly love what they do, and that just might be the secret formula here.

Let me just state that I really like Portnoy‘s former band, the earlier mentioned prog-metal veterans Dream theater, and I was really bummed when, back in 2010, I got the news he was leaving to pursue other musical endeavors. However, after hearing The Winery Dog‘s debut album however I stand fully corrected — now I’m glad he decided to venture into other projects. I strongly recommend getting this album — and to the creators, all I can say is ‘bring on the sophomore effort!’

Review:
I’d heard all about The Winery Dogs from every musician friend that I know. I was very interested in hearing them, but for some reason I didn’t get the album right away. The band is comprised of Richie Kotzen, the guitarist who briefly replaced C.C. DeVille in Poison, Mike Portnoy, Dream Theater‘s founder/original drummer, and Mr. Big‘s Billy Sheehan, the Steve Vai of bass guitar.

On their debut album I was expecting Mr. Big meets Dream Theater with kind of a glam feel, but I was wrong — what I got was a pleasant surprise. On top of their classic sound The Winery Dogs also have a much more modern feel, balancing influences from the ’70s, ’80s and ’90s. Also, Kotzen is a phenomenal guitarist, who was either holding back in Poison or has done lots of practicing since then. The man duels with Sheehan, and some of the solos and song arrangements are nothing short of spectacular — something you would expect from great guitarists. I listen to this album and I realize that Kotzen is an extremely underrated guitarist — and a pretty damn good singer too. Of course Portnoy and Sheehan also make a hell of a combo rhythm section.

I think the most amazing thing about this album is the fact that eleven of the thirteen songs were written collectively by the band members — and it shows. The other two songs, “Damaged” and “Regret”, were written by Kotzen himself.

The first song on the album, “Elevate”, has a very uplifting feel and message and is a fun song that would make time pass on a long road trip. It is a very good opener because the entire album is that way. The video for “Elevate” is just the three band members playing, but we see something about Kotzen that sets him apart from lots of other guitarists — he does not use a pick, instead he uses his fingers like Mark Knopfler. This means that he is finger-picking or tapping the fast leads that he plays throughout the album. And to do that intricate picking while singing is impressive. “Time Machine” has a kind of dark Deep Purple-esque feel to it, but the solo at the end of the song makes my head explode considering Kotzen is finger picking on it.

While it does have a modern rock/metal feel to it, The Winery Dogs also has the feel of metal that has been AWOL since the early ’90s. For example, “Damaged” is a power ballad that has roots and influence in ’80s metal, not unlike Soundgarden, but flows like a ballad that you might hear on the radio today — not to mention Kotzen‘s beautiful guitar solo.

The Winery Dogs basically have all the talent of Dream Theater, but the album is much easier to listen to for non musician fans. Yes, this is a ‘supergroup’, but one thing I like about this over other recent ‘supergroup’ outings is that while the songs are brilliant in musical composition, they are easy to listen to — they aren’t just each individual member showcasing themselves. All the songs sound different, yet they all have the feel that the same band wrote them. That’s one thing that makes this ‘supergroup’ more appealing to me than others.

The Winery Dogs have a chemistry that makes them sound like they have been together as a band for a decade, and I hope they are. I’m waiting for them to come to my area in concert, and I’m already anxiously awaiting their next album. So, if you haven’t yet, go pick this one up — you will wear it out.