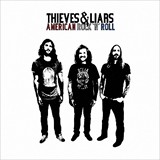 Review:
When a handful of people named Thieves & Liars latest CD as their favorite of 2009 curiosity got the best of me and I had to check them out. Upon listening to American Rock ‘N’ Roll, all I can say is that those Sleaze Roxx readers have excellent taste. This is a scorcher of an album, created by a trio that sounds more like an army of seasoned veterans than three guys from San Diego.

Thieves & Liars successfully recreate the strung out ’70s rock of Aerosmith and the blues drenched sound of The Black Crowes, only taking both to new extreme levels — playing with a passion and intensity that neither of those bands have displayed in years. The CD reminds me of early Brother Cane with Steven Tyler inspired vocals pushed to the brink of disaster. That’s one of the things I like about the band, the vocals of Joey Bradford are raw, unrefined and pure rock. Guitarist Corey Edelmann isn’t about to be overlooked though, as he tears up his axe and isn’t afraid to inject some slide when needed.

While the trio deliver a CD full of honest and hard rocking songs, there were two songs that really pushed American Rock ‘N’ Roll into the stratosphere. The first was “Till The Walls Fall Down”, which may be a simple anthem, but it’s done so well that it is instantly memorable. Even better yet is “Charlie”, a story about a young guitar slinger being taught by an elder bluesman. The song builds and builds until the title character becomes a legend in his own right. Judging by the riffs exploding throughout this musical monstrosity Edelmann should become legendary himself. Those two killer tracks sell the CD themselves, without even having to mention the smoking hot “Let’s Rock”, “Walking By My Side” and the slide driven “Killed A Man” and “Prodigal Son”.

Being a trio in the hard rock scene is one thing, being a trio that sounds like a six-piece band is another. It’s probably a good thing I didn’t hear this album until now, or my best of 2009 list would have been even harder to create than it was. While Aerosmith‘s ‘Toxic Twins’ whine at each other in the press, becoming nothing more than the ‘Toxic Bellyaching Bores’, there is a younger, heavier and hungrier band on the horizon… that band is named Thieves & Liars.