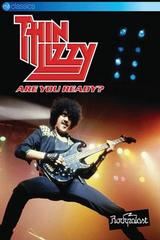 Review:
I was late getting into Thin Lizzy, in fact by the time I discovered the band frontman Phil Lynott had passed away six year earlier. Needless to say I feel like I really missed out not having been able to see them live. Instead I have the Live And Dangerous and Greatest Hits DVD’s to view over and over.

Eagle Rock Entertainment has dusted off Thin Lizzy‘s 1981 Rockpalast performance, and while there are some imperfections in the footage, the audio is fantastic. For those that know their Thin Lizzy history, this is from the Snowy White era, who was preceded by Brian Robertson and Gary Moore. Although White looks like he’s going through the motions on this performance, I don’t know if he was nervous of if he was incredibly laid back, but there’s no charisma or energy there between he, Phil and Scott Gorham. Perhaps the latter two were drinking and drugging prior to the show?

Regardless, the final product features the hits “Jailbreak”, “The Boys Are Back In Town”, “Emerald”, “Cowboy Song”, and “Rosalie”. There are a couple of momentum busters in the set, namely “Trouble Boys” and “Memory Pain”, but aside from that the show moves along smoothly.

Are You Ready? might not capture Phil Lynott and Thin Lizzy at their creative peak, however it does document the band playing one of the biggest shows of their careers, and perhaps a band that took it for granted. As a side note, Are You Ready? doesn’t include any extras, which is almost mandatory in this day and age. If you own the Live And Dangerous and Greatest Hits DVD’s then you’ll likely want to add Are You Ready? to the collection, warts and all.