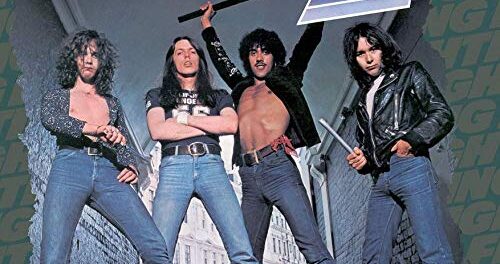 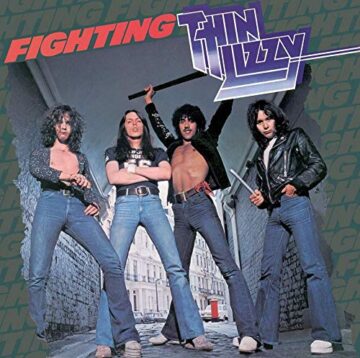 Review:
While most might not know it, on a short list of favorite hard rock bands, Thin Lizzy fall somewhere near the latter end of my top ten and it’s not for a lack of rock and roll love. Thin Lizzy just happen to hold a place in my rock and roll heart that lends itself more to quiet adulation than loud fanaticism. Matter of fact, compared to even some bands that rank higher on my personal lists, Thin Lizzy have released a higher percentage of records that I absolutely love. OK in all actually, out of twelve studio and two live albums released from their debut in 1971 until 1983, there’s not a clunker in the bunch. Yeah, fourteen molten wax records of rock and roll greatness filled with a unique blend of innovative duel guitar hard rock and storytelling songwriting rivalled only at the time by Bruce Springsteen, but we’ll get on that in a minute. The main point here is that despite mainstream respect to the contrary, Thin Lizzy were not only a great live act, but one of rock’s most consistent bands in regards to releasing great all killer-no filler records and while I love them all, none more so than the handful released by the lineup of founder / frontman Phil Lynott, drummer Brian Downey, and twin guitar greats Scott Gorham and Brian Robertson between 1974 and 1977.

While many look to 1976’s Jailbreak as the ultimate Thin Lizzy release due to its success in terms of album and singles sales, for me the centerpiece of my favorite Lizzy period releases is more a killer bridge between my favorite, Johnny The Fox, and my second Fighting. Understandably with Nightlife and Bad Reputation also making up that bunch, it’s a tough call and while I call Fighting my second fave Lizzy record, it really only sits slightly behind Johnny The Fox and on any given day if asked to choose, I might even lean the other way. But why bother to mince words, they’re all great but today Fighting gets the nod simply because it makes the retro review anniversary list and hey, I couldn’t be happier! But as I mentioned, I sort of keep my love affair with Lizzy close so for anyone expecting one of my mini autobiographical semi novels, let me apologize up front.

So first off, let me get the simple particulars out of the way. Fighting is Thin Lizzy‘s ten-tune fifth album featuring nine originals and only the second by the band to feature sole songwriting credits by a band member outside of main writer Lynott. Toss in the band’s killer take on 1972 Bob Seger tune “Rosalie” featuring guest appearances by Roger Chapman of the band Family And The Faces‘ very own legendary keyman Ian McLagan and what you end up with is a near perfect pint downing soundtrack of real life rock and roll. Whiskey rock and roll with an edge and I often chuckle when someone says they can’t believe such a rootsy, storytelling, rock band can come out of Ireland. Do your homework kids, there’s some mighty fine music to come out of that part of the world and Thin Lizzy are just the tip of the Guinness.

Switching from single guitar to double guitar format a year earlier, Thin Lizzy were one of the band’s (along with early Judas Priest) instrumental in popularizing a dual guitar line-up that became a staple of future hard rock bands like Iron Maiden, Scorpions, Saxon, and a good portion of the New Wave of British Heavy Metal bands that popped up at the damn of the ’80s. While similar in theory though, Thin Lizzy‘s brand of hard rock was also laced with bits and pieces of R&B and Irish folk customary of a group of musicians rocking out of Ireland, which is why it is of little surprise that the band chose to open up Fighting with a cover of Detroit soul rocker Bob Seger‘s 1972 track “Rosalie.” Not only does it soulfully fit in Lynott‘s musical wheelhouse, lyrically it fits right in with what music critic once said was Lynott‘s preference for “slice-of-life working-class dramas of love and hate.” True to the description, starting with the second track, Fighting continues with nine songs dedicated to real-life situations relative to rockers from Dublin to Detroit.

Beautifully beginning with the now classic twin guitars of Gorham and Robertson, “For Those Who Love To Live” quickly drops into a Lizzy groove similar to 1977 quasi-hit “Dancing In The Moonlight” and is an immediate reminder that, while the double guitars are cool, it’s the to-the-point rhythm section and soulfully-delivered thoughtful lyrics that truly make each and every song pure Thin Lizzy. Even with twice the amount of guitars, the bass is never buried and the drums always simply smack in the middle of the pocket and it’s not only what makes the band’s music so cool, those ingredients define the greatness that was Thin Lizzy live.

After sharing material spotlight with Seger and Downey to kick things off, Lynott takes back his usual solo writing space for the remainder of the first side of Fighting starting with “Suicide”, a song with roots going back to 1973. Clocking in at 5:11, it’s not only the longest track on the record but one of the darkest lyrically and a song that could just as easily be about today’s racially charged times as anything Lynott was inspired by in the early ’70s. Certainly, the highly charged religious divisions in the area factored into Lynott‘s writing but one has to believe that his desire to soak music and cultures as mixed as his own heritage had a heavy hand into the songs that poured of his heart, soul, and pen.

Oddly enough, even at his darkest, Lynott possessed a lyrical ability to add a sort of romanticized notion to just about every tale and proof can be found in this stretch of tracks with the sincere questioning of “Suicide”, the sweet please come home near balladry of the strummy “Wild One”, and the pull yourself up by the bootstraps anthem “Fighting My Way Back”, a cool song that could have been groovy under the watch of serious era Marvin Gaye or Bruce Springsteen had in not already been delivered perfectly by the hand of Lynott and crew. While introducing the new sound and line-up on the previous year’s Nightlife release, it’s not until Fighting that Lynott found his true calling prompting one music journalist to describe it as the point he began “fully flourishing as a rock & roll poet.”

Aside from “Silver Dollar”, written by Robertson, the second half of Fighting pretty much belongs to Lynott and Gorham, and makes for possibly the most musically mixed side of a Lizzy record with only a single track credited to only Lynott, that being dark ode to death ballad “Spirit Slips Away.” The track features some of Lynott‘s best bass work, beautiful solo action, and thought-provoking lyrics about the final thoughts of life. Not your usual rock and roll fare but as already mentioned, Lynott (and Thin Lizzy) were far from a typical rock and roll band.

Gorham and Lynott share song space on “King’s Vengeance” and “Freedom Song”, a pair of melodic rockers with plenty of hooked-filled sounds and vocals. The former, yet another tale filled with visual lyrics begging for imagination while the latter, a catchy rock track that could have easily fit along side any of the more mainstream songs on breakthrough Jailbreak. Again, Lizzy somehow manage to take stark reality and add a melodic spin to it creating an entirely unique, yet inviting, vibe. Oddly enough, the guitar work, while similar to something akin to Marshall Tucker, is still pure Thin Lizzy.

The Robertson-penned “Silver Dollar” is a ’70s blues rock style ditty with even more slight nods to southern rock and listening, I can’t help but catch sights of cutoff blue jean summer days and my transistor radio. It’s maybe the least Lizzy sounding tune on Fighting but that’s cool, the feels generated make it worth the slight switch. Besides, who can complain when Gorham closes out things by delivering edgy rocker “Ballad of A Hard Man”, a guitar groove-loaded tune that is hardly what most would think of when hearing the word “ballad.” For my dough, out of the ten tunes on Fighting, it’s the one best suited to finish off the festivities and if that’s not enough, the solo guitar stuff is down right air guitar worthy.

Opinions will certainly vary among fans on which Thin Lizzy records take the most cake and as previously mentioned, if saddled with choosing just one, more often than not I’d pick Johnny The Fox but if you threatened me with this day’s retro anniversary release, you really wouldn’t have to worry about me Fighting… at least not much.