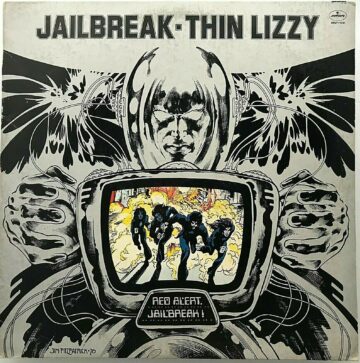 Review:
Some records make you move, some make you dance, and some even drive you to the point of extreme physical exhaustion. But every once in a great while, there are those records that, years after they first stole your heart, at every listen still grab your soul and drag you happily back to the place you first fell in love with the songs. Suddenly, like every other time, for the millionth time, you’ve fallen head over heels in love all over again. For me, there is, and never will be, such a thing as a bad Thin Lizzy record. While it’s true that I may hold a listening preference to Thin Lizzy‘s other 1976 release Johnny The Fox, there is just something magical in the grooves of Jailbreak.

I was blessed to see Thin Lizzy live in Germany just after my favorite period of the band (1975-77) and to this day, it’s impossible to look back on that day without feeling lost in time. After weeks of excitement including a show day that seemed to last forever, the final “ceremonial” action in preparation for a “proper” night of “live Lizzy” was a full on spin of Jailbreak. Sure Johnny The Fox or Bad Reputation would have been just as cool but Jailbreak, with all its references to “the boys” and “getting up and going down” just spoke to my teen pals and I. Despite our young age, the visuals still made sense. Most of the guys considered “Cowboy Song” to be their own personal theme and “Fight Or Fall” our American dependent gang battle cry through our adventures in a foreign country. Not that we ever had this plan of knocking off anyone, we just had this thick as thieves ideal created by a common bond.

While the Thin Lizzy catalog comes bearing a loaded cannon of tough rock and roll driven along by thick grooves, I can easily say that from first listen, it was that soft heart beneath the tough exterior that sucked me into the music. A closet romantic due to an early degree of shyness, Phil Lynott‘s ability to perfectly romanticize every aspect of Thin Lizzy‘s music, regardless of the theme, caught me by not only the ears, but heart and soul. From the first time I heard “A Song While I’m Away” from 1973’s Vagabonds of The Western World, I wanted to be cool enough to say or even write such words but kind of felt outside looking in on “Romeo And The Lonely Girl.” Even so, like a great movie, the feeling that there was this personal connection made it seem more magical than discouraging which is where the uplifting words of “Fight Or Fall” and even “Jailbreak” come into play. That sort of Rebel Without A Cause tortured soul that despite a heart of gold, should never be counted out. That kind of thing Jared Leto had in My So-Called Life that for ages has found its way into the hearts of romantic rockers and while all respects to Jordan Catalano, Lynott did it well before and far better leaving behind recorded proof. But before I spill too much blood, let me get back to the rock and roll.

In the history of music, there are many classics that while incredible, have burned the ears so often that even the mere mention brings a cringe. There’s no denying that “Stairway To Heaven” is loaded with emotional bombast but the first few notes can cause a change in radio station. You get that same feeling of chills within the first screams of the original live version of KISS‘ “Rock And Roll All Nite” but unless you’re hearing it in person, about halfway in, you debate letting it play until the end. Well in some ways, songs like “Jailbreak” and especially “The Boys Are Back in Town” could very easily fit in that company if it wasn’t for the fact that there is just something just as magical in Jailbreak‘s most overplayed tunes as there are in the seven other incredible songs on the record. Maybe it’s in the sound, or the delivery, or the recollection of that initial feeling back in 1976. I’m not sure and honestly the fear in questioning is that actually discovering the answer might make the feeling disappear.

Of course, we all know that first note and pause of the album. The stomp and that guitar lick and eventual vocal delivery. The chunking notes just create the feeling of creeping around and that quiet aura of danger around the corner. Few hard rock songs have created such a visual just in sound and Thin Lizzy‘s mix of edge and melody makes for the perfect emotional theme song for bad boys everywhere, especially back in 1976 through the next ten years or so to follow. Yeah, I have heard it a million times like “Rock And Roll All Nite” but this one, it never gets old. Never.

Taking a hint from The Who‘s “Pinball Wizard” and making it much cooler, “Angel From The Coast” is just as much of a storytelling tune filled with characters and more done up in Lynott‘s classic romanticized style. It’s a style not too far removed from the early catalog of another rock and roll poet Bruce Springsteen. If Thin Lizzy‘s strength was grabbing with melodies, their superhero power was easily Lynott‘s lyrics making it cool to flex even some literary muscle in rock and roll.

The first taste I had of Jailbreak, a brand spanking new Maxell cassette with the band and title neatly scribbled across the white bar on the label, involved a jaunt across the apartment complex blasting the songs from my jukebox and rocking along until being stopped by the change in grooves on “Running Back.” I distinctly remember stopping to sit on the playground bench to rewind the tape so I could hear the beginning again as if to wonder if I had actually heard the beautiful guitar lick and that tiny yet effective snippet of saxophone. Over 50 years later when the song plays, it is the moment I most anticipate. Sheer perfection. And once I allow myself to let the song continue, become lost in a song that over the years I easily felt my own heart could have written. “When they say it’s over, it’s not over completely.” Like that, the lyrics of Lynott live on.

“Romeo And The Lonely Girl” veers back into that poetic Springsteen territory and while it’s true that for many of the same reasons, I dig Springsteen, there’s is something altogether different in any of the similarities found in Thin Lizzy‘s music. It has always been within the territory where Lizzy flirts in between melody and heaviness that perhaps Lynott and company most left their mark on music leaving this sort of blueprint for not just many a New Wave of British Heavy Metal band, but every hard rock band yielding a complimentary set of electric guitars in delivering a mix capable of being as brutal as it is beautiful. Few bands in history have been able to go from the middle of the road greatness of “Romeo And The Lonely Girl” straight into the blistering stop and go crunch of the edgy and chunky “Warriors.”

Down the home stretch, Thin Lizzy left little out on Jailbreak bringing full on infectious sing-a-long goodness to the rollicking groove of classic “The Boys Are Back In Town” and the mellow anthem grooves of “Fight Or Fall” and “The Cowboy Song.” The latter two still conjures up visions of chill quiet smokey moments hanging out in the German fields listening to tunes and making memories meant to last forever but destined to be lost in the moment. Funny how far away in western Europe, we could get just as lost in visions across the sea as Lynott obviously was. Maybe it was a born link to America who knows but I always felt like Lynott somehow managed to take the best of his own Irish heritage and inject it with a good bit of American sensibilities.

Speaking of Irish heritage, perhaps Jailbreak would have never been truly complete without finishing up with closing Thin Lizzy classic “Emerald” full on with its unique time signature and melody. With all its traditional sounds, Lizzy still pulls off a blazing metal masterpiece once again proving the band just as much pieces of metal as melody. In 1976, Jailbreak being Thin Lizzy‘s breakthough in America is perhaps a crime considering how solid the band’s studio releases were leading up to then. In reality though, it was really 1976 where Thin Lizzy as a whole broke through all around not only breaking into the US album Top 20 but besting previous release Fighting‘s #60 ranking on the UK charts by 50 spots to break into the Top 10. From there the band would mainly be a consistent force in the UK all the way through to their final album Thunder And Lightning in 1983.

While there may be magic within the sounds of Jailbreak over the years, it has somehow managed to spread to other catalog favorites like Bad Reputation and Fighting. Certainly at least in part fueled by memories and the time, one thing is certain, like many of the band’s records from the period, the music of Thin Lizzy continues to have this way of keeping fans “Running Back.”

Thin Lizzy‘s “The Boys Are Back In Town” video: