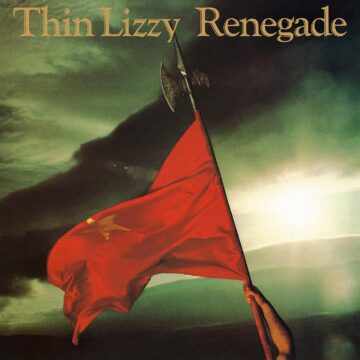 Renegade’s striking red and gold cover graphics capture a real mood… It’s interesting that keyboardist Darren Wharton, who is a contributing member to the album, is nowhere referenced. This was ex-Pink Floyd guitarist Snowy White’s second album with Lizzy, and would be his last. Otherwise, the line-up was rounded out by the ever dependable guitarist Scott Gorham (who must have been getting dizzy with the revolving door of co-guitarists who had been joining him), founding member and drummer Brian Downey, and of course Philo. The production on Renegade is spectacular with the duties being shared by the band and legendary British boardsman Chris Tsangarides. There is an incredible variety contained on the album’s nine songs, and the production absolutely shines on them all.

Right out of the gate is one of Thin Lizzy’s heaviest ever, “Angel of Death”, which is full of awesome riffs and Phil’s legendary storytelling. Next up is the title track, which is one of my personal all-time favourite Lizzy songs. Apparently Phil was inspired to write this one after seeing a biker with Thin Lizzy and Motörhead patches on the back of his jacket! A really interestingly structured song, it’s absolutely unique, and has more great lyrics from the master wordsmith. Renegade continues from strength to strength. Another heavy rocker, “The Pressure Will Blow”, follows, and the heavily ZZ Top influenced “Leave This Town” rounds out the old vinyl side one. Side two features some incredible variety in the band’s songwriting, from the supremely catchy “Hollywood” (featuring one of the band’s most stirring guitar harmony breaks), to the emotional “No One Told Him”, onto the jazzy “Fats” which was a tribute to Fats Waller. Another gem is the tex-mex flavoured “Mexican Blood.” The Thin Lizzy members were seemingly pulling out these gems at will. Closing track is the ominous “It’s Getting Dangerous”, which rounds out this fantastic collection of songs.

Thin Lizzy supported the album with a European tour, but did not visit North America this time out. This probably accounted for Renegade not making much of a dent in the charts over here. It’s kind of left the album with a ‘hidden gem’ aura. Regardless, this release has a timeless quality to it which only makes it improve with age. Forty years on!