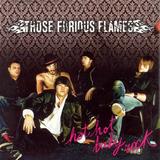 Review:
The recent comeback of late 80’s early 90’s flavored Sleaze-Rock has brought us heaps of great bands so far and it doesn’t seem to be ending soon, which is great! Most of these bands hail from Sweden, but the rest of the world is catching up. The scene in Switzerland is growing as well, which has ended up with top-notch bands such as Backwash and Silver Dirt.

Those Furious Flames are the next Swiss newcomers trying to get into the spotlight, playing dirty Punk’n’Roll the way bands of the first wave of ‘Scandinavian Action Rock’ like the Backyard Babies or Gluecifer used to play it back in 1998. Unfortunately Those Furious Flames never reach the same songwriting-level those now legendary bands did.

I’ve listened to Hot Hot Baby Rock a few times now, but still no song, expect “Burning Feelings”, managed to stick in my mind for more than one minute. The whole thing just passes me by, which is probably because of the singer. His accent may put off quite a few people who otherwise would enjoy this disc, as the 12 songs presented on here are well-produced and offer a fair amount of variation.

Because this is a fresh band on the scene I do not want to criticize them too much, but I doubt that with this singer they are going to gain a lot of fans. It’d be interested to hear some of these tracks sung by someone else, who has a better and perhaps a little grittier voice. Maybe I’m a bit to harsh tough, so if you are into the bands mentioned in this review and you don’t mind the accent, judge for yourself!