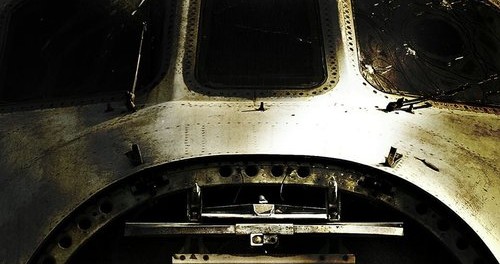 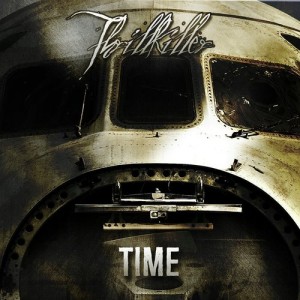 Review:
Well America (and beyond), consider yourself fully informed and on placed on notice. That’s right, you heard me and if you have a like for music and musicianship that is so far above the bar that you can’t even fathom the concept, than zip on over without delay and nab the four song independently released, yet so professionally put together that it will blow your collective minds, EP appropriately entitled Time from Baltimore, Maryland’s Thrillkiller.

For those that missed the subtlety earlier, yes it is Thrillkiller‘s time. Time to kick our collective musical asses and take the world by storm. Also, let me assure you that the band’s name does not literally reflect the music they are laying down for us to enjoy — as killers of thrills, they ain’t. Some may be privy to Rob Bradley and Maxim Sobchenko through their previous efforts with the long running hard rock/metal band Aries which are certainly worth a search and appreciation…

On this EP, Bradley‘s vocals are some of this genre’s best. The guy has some serious range and could sing the phone book and send chills, as does the highly proficient noodling from axeman Sobchenko. His playing is so complex, yet hook laden that the music geeks and their girlfriends alike will get drawn into the tunes and appreciate them as the arena rock anthems they are destined to be, as well as the clinics in guitar player lessons they should be. The band certainly is a hard rock band with a number of past, present and future influences brandished in these four songs. The opener “Passion Killer” starts off a stomping a la Styx‘s “Renegade” or Ram Jam‘s “Black Betty” with a hard rock flair that should be pouring from any hard rock radio station today. Next up, “Time” — a massive hard rock number with soaring vocals over top some amazing rhythms  — will have you singing along before the end of the first chorus. “In Too Deep” is next which again harkens back to those late ’70s rock anthems with enough modern elements to sound so fresh and ahead of the curve that everyone will be emulating them before we know it. Lastly but certainly not least is “The Storm” which again is as sweet as molasses to your ears and will inevitably have you running back to the repeat button to hear this and the whole EP again and again.

Thrillkiller have crafted four of the best rock n roll songs you will hear this year — no filler all “killer” for sure. Yes, technically, this is 2015 release, but its release was way too late for full immersion and appreciation. As mentioned earlier, do NOT hesitate in racing out and nabbing this EP before it’s long gone and Thrillkiller have released their full length on a major label (omitting these four cuts) and the EP is a thing of legend only serious collectors have on their shelves and that warrants outlandish Ebay prices.

I wish Rob and Maxim the best as aside from being proficient musicians creating amazing songs, they are great fellows and certainly don’t let their amazing musical abilities and what should be equally hefty egos take them away from the fans that every musician desperately needs. Great things are in store for Thrillkiller and I am quite pleased to have touched the greatness.

Our first song, from our upcoming EP, Time