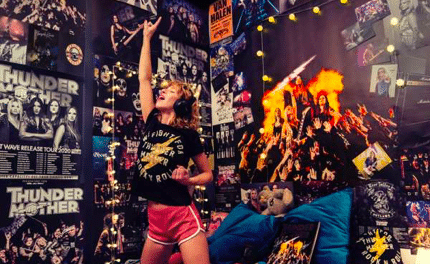 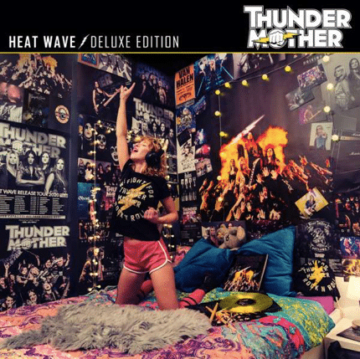 Review:
One of the worst things about the Covid pandemic for musicians (and fans as well) for more than a year now is that they have been — for the most part — unable to tour to promote their new albums. There have been many brilliant albums released in the last 15 months that simply didn’t get the push that they deserved. You just have to take a look at the albums listed on the Sleaze Roxx’s Top Ten Albums of 2020 for a few records that simply did not get the push that they deserved including The Wild!‘s Still Believe In Rock And Roll and Pröwess‘ Blacktop Therapy. One band that has been able to tour at least a little bit during the pandemic is Thundermother who did three tours, and mainly in Germany from what I understand. While the Thundermother band members admittedly did not make any money on those tours and took some big risks to get out there (as per drummer Emlee Johansson in a recent interview with The Cosmick View), at least they had the opportunity to support their fantastic fourth studio album Heat Wave which was released back on July 31, 2020.

Even though Thundermother received many accolades for Heat Wave including landing the #1 spot on the Sleaze Roxx’s Top Ten Albums of 2020 and being voted to an impressive #6 slot on the Sleaze Roxx Readers’ Top 20 Albums of 2020, the band members felt that Heat Wave simply did not get the attention that it deserved. I have to agree as Thundermother being able to fully tour to support Heat Wave would have certainly helped to lift the album’s profile. Given the continuing Covid pandemic, the Thundermother band members came up (or whomever came up with the idea) to release a “deluxe edition” of Heat Wave consisting of the 13 tracks from the previously issued record along with an additional bonus CD featuring three new tracks, some acoustic renditions of three of the four singles from Heat Wave and some live tracks including two previously unreleased songs (on albums). At first, I was a little skeptical about purchasing Heat Wave Deluxe Edition since I already had the album Heat Wave but I have to say that I am really glad that I ended up taking the plunge.

Given that I have already reviewed Heat Wave, I won’t be spending any time in this review re-analyzing that album bit there is no need to say that I think that it’s a brilliant album and my favorite ones for 2020. The three new tracks alone are almost worth purchasing the Heat Wave Deluxe Edition. Back on May 21st, the Thundermother band members consisting of Johansson, singer Guernica Mancini, guitarist and band founder Filippa Nässil and bassist Majsan Lindberg did an informal live stream chat to celebrate the release of Heat Wave Deluxe Edition. I found it interesting to hear them describe the three new tracks and how they had received some negative feedback about the “poppier” single “You Can’t Handle Me.” First off, all three new Thundermother songs sounded like Thundermother to me. I didn’t think that one sounded like a “punk rock” song or that one if the songs sounded poppier than usual.

Secondly, I actually thought that the best new song out of the three was the “poppier” sounding “You Can’t Handle Me.” When I first heard the track, I didn’t think that it was poppier but simply, it was a great catchy song. After hearing the Thundermother band members describe it as a “poppier” song, I can see why they would say that but I still feel it’s just a great song. It actually reminds me of vintage Steel Panther with the great melodies. “Show Me What You Got” does have a bit of a punk feel to it but I just think it’s a great rocking track. If anything, it reminds me a bit of Thundermother‘s second album Road Fever where they seemed to adopt more Motörhead type influences. Although it seemed that all of the Thundermother band members really liked the first single “The Road Is Ours”, I felt that this was a good but somewhat standard Thundermother fare. I don’t feel that there’s anything super special about the track but it’s definitely a good song overall, just not a great one.

I have to say that I was shocked at two of the three acoustic renditions on Heat Wave Deluxe Edition because they were so good and so different from the versions that can be found on Heat Wave. The acoustic version of “Driving In Style” is really well done. I would never thought that Thundermother could slow down the song so much yet it still keeps its fire with a bit of a different guitar solo from Nässil towards the end. “Dog From Hell” is the standout acoustic track. I believe that this is the song where Thundermother experimented quite a bit including with a banjo and the “Hey” background vocals throughout parts of the song work really well. The only acoustic track that I not quite fond of is the ballad “Sleep.” I believe that it was Mancini who indicated that Thundermother felt that the ballad did not get the recognition that it deserved due to the pandemic. While it’s a good track, I don’t feel that the acoustic version is that different from the original and the vocal duet with Jesper Binzer is underwhelming since Mancini has much better voice. You’ll also note that “Sleep” was probably my least favourite track on Heat Wave when I reviewed that album last year.

Heat Wave Deluxe Edition closes off with four live tracks. The first two live tracks — “Give Me Some Lights” and “Thunderous” — are really fun to hear since back when they were recorded, only Nässil was in the line-up. Accordingly, it’s almost a brand new line-up playing some vintage Thundermother and those two songs sound really good. If you didn’t know that Mancini, Johansson and Lindberg weren’t part of the original versions for those songs, you certainly would not get that impression from hearing Thundermother‘s current (and I think best) line-up crank out those tracks live. Funny enough, I recently had a chat with my friend Rich “The Meister” Dillon, who runs the excellent CGCM website and 24/7 internet radio channel. Rich actually preferred the first two Thundermother albums with singer Clare Cunningham over the latest two albums with Mancini on lead vocals. Wow! I had assumed that everyone was on board that Thundermother have made leaps and bounds with their last two albums (Thundermother and Heat Wave) and that their current line-up is definitely their best. Considering that I have not heard from three of the four band members that left Nässil high and dry back in early 2017 and with Cunningham seemingly playing anything music wise except proper rock n’ roll, I think there is no doubt that Thundermother‘s current line-up is the best one.

As I delve back into reviewing Heat Wave Deluxe Edition, unfortunately, the last two live tracks — “Hellevator” and “Rock ‘N’ Roll Heaven” — finish the record on a bit of a whimper. If I recall correctly, Nässil noted in the band’s live stream on May 21st that “Hellevator” was one of the group’s most popular songs or something like that and even though it did not appear on any Thundermother studio album. “Hellevator” was released back in late 2016 just before the band’s line-up imploded and somehow that track did not make it on Thundermother‘s self-titled third album. Overall, and similar to “The Road Is Ours”, it’s a solid song but not one of Thundermother‘s best. In any case, it’s nice to have “Hellevator” make it onto a Thundermother record. Heat Wave Deluxe Edition closes with the underwhelming “Rock ‘N’ Roll Heaven” which also features former Michael Monroe guitarist Dregen and Bonafide frontman Pontus Snibb on guest lead vocals. The track is a slower one that I hope that Thundermother drop from their live set by the time that I see them play live one day.

Overall, Heat Wave Deluxe Edition is a very cool release. Just the bonus CD with the three new songs, the three acoustic tracks and the four live renditions is worth the purchase price right there. The album cover is also really cool with a young woman seemingly in her bedroom decorated by rock posters. I can certainly relate. Hell, one of my friends even put posters up on his bedroom ceiling back in the day because he had run out of room on his bedroom walls. Those were the days but I digress. The bedroom walls on the Heat Wave Deluxe Edition album cover are filled of course with lots of Thundermother posters but you can also see a few from some of the biggest bands in the land — KISS, AC/DC and Van Halen. If you have somehow not yet picked up Heat Wave, you should definitely get Heat Wave Deluxe Edition. Even if you have Heat Wave already, the bonus CD on Heat Wave Deluxe Edition is more than worth the purchase price and it will be a CD that I will definitely play for years to come.

Reviewed by Olivier for Sleaze Roxx, May 2021

Thundermother‘s “The Road Is Ours” video:

Thundermother‘s “You Can’t Handle Me” video: