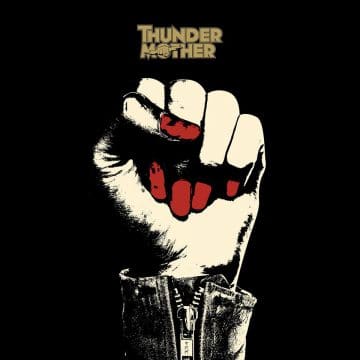 Review:
As a music reviewer, it’s always exciting when I can talk about a fantastic album. Thundermother‘s self-titled this album is one of those. Before I get into the album, it’s worth noting that Thundermother seemed on the brink of folding when four of the five band members quit the band including raspy singer Clare Cunningham. Faced with what could be described as a mutiny, guitarist Filippa Nässil went on her scheduled vacation, reflected and assembled a brand new cast of members to continue the Thundermother adventure with her. What I like and respect the most about Nässil is that despite some of her former band members openly criticizing and bashing her upon their departure, Nässil has refused to engage in a bitter feud by taking the high road and wishing that some of her former bandmates had done the same thing. My hat goes off to Nässil in that regard.

Thundermother‘s track record is a strong one. This is the third really good album in a row from the Swedish female hard rockers. The band’s debut album Rock ‘N’ Roll Disaster, which was released in 2014, sounded like what AC/DC would sound like with a female frontwoman. The group’s sophomore effort Road Fever in 2015 was a slightly heavier and faster paced affair, which rocked as well. Fast forward to 2018 and not only does Thundermother have to follow up two strong records, the group has to do so with a new supporting cast surrounding band founder Nässil but also one less guitarist as the group dropped from a five piece to a four piece. Throw in that the likely most important position in the band is filled by newcomer Guernica Mancini, who had to step in for the very strong singer Clare Cunningham, and you can see why Thundermother had a lot to prove with their third studio album. All of my possible doubts were extinguished very quickly when I heard the first single “We Fight For Rock N Roll” which sounds like standard AC/DC paced fare with Mancini‘s distinctive raspy voice leading the charge.

By the time that I heard the next single “Whatever”, I was really excited to get the album and so much so, that I pre-ordered the record and decided to wait until I got the physical copy in my hands before listening to it in its entirety. I know, you’re probably thinking, “Why not listen to the album digitally rather than wait for the physical CD if you’re so excited about the record?” The reason is simple in that when I first heard the digital tracks forwarded my way by Tales From The Porn and Tuff frontman Stevie Rachelle for the former band’s debut album, I thought the songs were quite good. When I finally heard Tales From The Porn‘s debut record H.M.M.V. in its entirety in physical CD format, it ended up finishing #1 on the Sleaze Roxx’s Top Ten Album of 2017. I was slightly concerned by the amount of tracks on Thundermother — 13 in total — given that in my experience, it’s hard enough to come up with six to seven really good songs on an album and 13 seems too lofty of a goal for any band. As it turns out, there’s only one track that I would consider “weak.” The ballad “Fire In The Rain” is alright but a tad placid and lacking emotion. I think it’s because Mancini‘s voice on that track could have used some higher and more powerful intonations to get the song to that next level as the track progressed.

Aside from that, the songs all really rock with some a little more than others. My favorite other than the two singles are the very AC/DC sounding opener “Revivial”, the faster paced “Racing On Mainstream” and the message filled “Quitter” (or should I say “I’m no quitter”). I know Nässil wanted to take some risks this time around by amongst other things, adding a ballad. While “Fire In the Rain” does not tickle my fancy, the faster paced kind of ballad “Follow Your Heart” is a good example of Thundermother successfully expanding their horizons. Thundermother‘s self-titled album is easily one of my favorites of 2018 thus far. It’s still early but I could certainly see it finishing in the top 10 for this year.