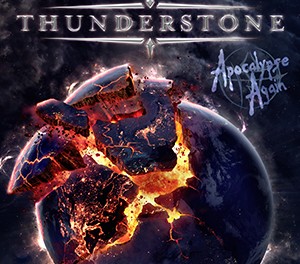 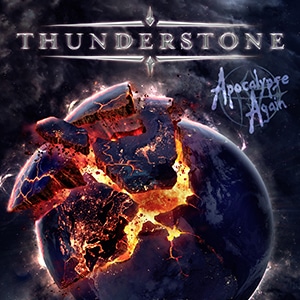 APOCALYPSE AGAIN
To be released on April 15th, 2016 (AFM Records)

Review:
This was certainly a surprise for me, Thunderstone are back and with Pasi Rantanen on vocals again no less. It’s curious to me how the synergy between a vocalist and a band can make or break them. I’ve tried to pinpoint the exact reasons when a band simply doesn’t reach the same level of quality when their frontman departs and is replaced, and how some others, despite it always being a worrisome situation for us, the fans, manage to retain their identity and sound.

There’re cases on both sides of the spectrum, on one side we have examples like Iron Maiden who were never the same without Bruce Dickinson, and Iced Earth without Mathew Barlow who, at least for me, have never been as great with either Tim Owens or current vocalist Stu Block. On the other hand, there’s Kamelot for example, who after losing fan-favorite Roy Khan went with the unlikely choice of Tommy Karevik who was doing outstanding stuff in Seventh Wonder but didn’t sound at all like his voice would fit with the band’s sound; which quickly proved to be a wrong assumption.

Still, one wonders if the return of a vocalist can be enough for a band to return to its former glories or not. In this regard, too, there’s been both success and failure. Which leads us to the task at hand, is the return of Rantanen enough to make Thunderstone‘s return something great? I can tell you right now from listening to Apocalypse Again a number of times, that it certainly makes for a more than pleasant comeback.

Each song offers catchy melodies and excellent vocals. “Veterans Of The Apocalypse” starts off Apocalypse Again on the right foot with rapid-fire tempo and some great riffs. “Fire And Ice” is another highlight of the album using some of those amazing keys so characteristic of the genre courtesy of Jukka Karinen and a great tone change from Rantanen. “Again Wounds” is a classic speed metal anthem. “Days Of Our Lives” makes for a very dynamic tempo changer and a favorite of mine from the album. The epic closer “Barren Land” has a little of everything that makes Thunderstone impressive, ending the album on a high note.

I remember Thunderstone coming to the forefront of the Finnish power metal scene when Stratovarius was having all its Tolkki-related problems and at a point where it was very unlikely that they would ever release another album. Apocalypse Again reminds me why I used to love Thunderstone so much back in those days and why they were instantly considered among the best of their kind.

Every band member plays their part well, but the driving forces of Thunderstone are the main songwriter and guitarist Nino Laurenne and Rantanen. As is well known by now, Pasi Rantanen‘s voice is unique and he has a significant range. He shows his versatility in Apocalypse Again. The album doesn’t try to reinvent the power metal wheel but does deliver a high-quality set of songs ranging everywhere from speed metal to mid-paced hard rockers. The vocals represent one of this album’s main strengths and demonstrate that Rantanen is paramount to Thunderstone.

If anything, I would say that Apocalypse Again is too short. But I’d much rather have nine great songs than an album made uneven for being crowded with fillers — something that is happening too often these days. Hopefully, this renewed alliance will last this time around, and we’ll get to hear many more albums from Thunderstone with this configuration.

Thunderstone – Veterans of the Apocalypse