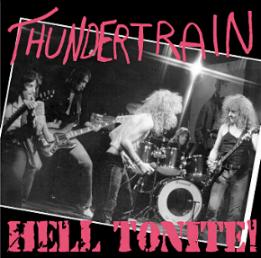 Review:
Fans of Quiet Riot and Helix will love this live release from Thundertrain. Recorded on February 1, 1979, this is by no means a new band on the scene. In fact many may recognize the name Mach Bell as the vocalist that would front the final version of the Joe Perry Project upon Thundertrain‘s demise. This is the type of band you usually see playing in the mid afternoon of an outdoor music festival, delivering raucous rock to drunk and/or hung-over fans.

Judging by this disc, it amazes me that Thundertrain didn’t become huge. They have an excellent delivery, combining hard rock and southern harmonies, the perfect blend for a live jam band. You could put these guys on a stage with road warriors like Pat Travers, Blackfoot and Aerosmith – and they would fit perfectly.

Mach Bell and his gritty delivery is in complete control of the crowd throughout while distorted guitar solos and heavy beats complement each song. Kicking off with the unrelenting “Hell Tonite”, things rarely let up over the next hour. Standout tracks include “Love The Way”, “Readin’Riotin’Rock’n’Roll” (with it’s incredible guitar line), “Dirty Water” and a cool cover of Slade‘s “Mama Weer All Crazee Now”. The anti-disco tirade on “I Gotta Rock” is entertaining – and the fact that the original radio broadcast censored the word “sucks” is amusing.

Perhaps Thundertrain was too raw and raunchy to move from regional stars to headliners. But whatever the reason for their lack of success, they sound like one killer live band. In fact they have reformed and can be found at www.thundertrain.com, or bought at www.gulcher.gemm.com. If ever there was an appropriate name in rock’n’roll, this is it.