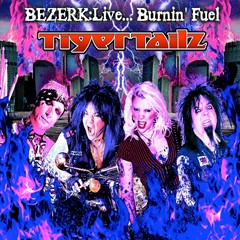 Review:
Back in the fall of 1991, at the age of 17, I left home and went off to college at Southeast Missouri State University. There were many formative experiences that happened that freshman year and near the top of that list was a most improbable purchase — for $2.99, I bought a cassette tape of Tigertailz‘ Bezerk from a bargain bin in the music store at the mall. I had never heard a note of the music on the release, but I knew I loved the artwork. Twenty years later, Tigertailz still holds one of the most sacred places in my musical heart.

Now, two decades after Bezerk burst upon the scene, the band has released Bezerk: Live… Burnin’ Fuel to the masses. This is the band’s first live album since 1996’s You Lookin’ At Me, and is the group’s first release of any kind since the untimely passing of my all-time favorite glamster back in 2007 — Pepsi Tate. The band has NOT disappointed with this release!

This CD features all ten songs from the Bezerk album, performed in order, culled from three European shows in 2010. Additionally, the band adds on an encore of two stunning cover tunes, a ripping version of The Osmonds 1972 hit “Crazy Horses” as well as Motorhead‘s classic anthem “Ace Of Spades”. These twelve songs sound stunning, and the band is as sharp as ever.

All these years later, many of the albums I loved as a teenager don’t stand up — I listen to them now and I often find myself wondering why I thought the music was so brilliant in the first place. Bezerk isn’t like that… when I listen to the original album, I still hear one brilliant song after another — huge choruses, catchy melodies, and stunning production. This live album is not only proof positive that Tigertailz is still viable and relevant today, but also that yes, the Bezerk album is just as brilliant as I thought it was so many years ago when I first bought it.

I have an entire room of my home painted the colors of the Young And Crazy LP cover, and the room is in effect as museum of Tigertailz history. I can only hope this band makes some more history as we go forward. If they do, I’m sure going to be there to enjoy it!