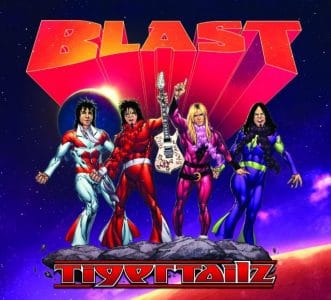 Review:
For those that have read my reviews and know me as a person, you know I’m a huge Tigertailz fan. Since the very beginning, when Steevi Jaimz fronted the band, they just set the standard (for me at least) for glam rock and the glam look and imagery. Those pictures and sounds from the first album Young And Crazy became a milestone album for me along with Mötley Crüe’s Too Fast For Love and is still, to this day, on my playlist. The next album Bezerk, with the black leather and color-splashed hair and even more musically bombastic sound, set the stage for a lifelong adoration.

With the changing tides of music, listeners’ tastes, personal and record company issues and everything else you can think of it seems, brought about some tumultuous times with the band, to say the least. So to this day with breakups/hiatus, ownership rights, members coming and going, album reissues (Yayyy!) and sadly, the passing of bass player Pepsi Tate, I stuck with them through thick and thin. Musically they have had their ups and downs with me, not quite the level of those first two albums for me, but as I’ve grown older, I’ve become more open and understanding of change and musical progression, so I still admire the later albums Bezerk 2.0, Thrill Pistol, Knives and now which brings me to the band’s latest release, Blast.

With my aforementioned idolization of the band and being given the opportunity to review the album and with some “other issues”, I was to put it mildly, highly nervous. So you say, what are those “other issues.” To be honest, I’m not a great fan of the current image and first impressions of songs “Pipped It, Popped It” and to a lesser extent “Dynamite” just didn’t grab me. Maybe it was the videos but I will admit, I said to myself “What’s happening here?!” So now the album sits before me and I’ve listened and listened to it again. I waited a few days and listened again [laughs].

So now with all that introduction and me going on and on about the band, what are my thoughts on the album? It’s not as bad as I was expecting. Yes, I know it’s not those iconic albums. Yes, I know times and people change and it is a good album, full of catchy sing-along songs that Tigertailz are known for and should be quite fun to hear live. But let’s do look at the pros and cons, shall we?

First the cons… I’m going from a digital copy but production wise, it is a little tame for me. Jay Pepper’s guitar is low in the mix and just lacks that “bite” I think it should have. Matt Blakkout, while being a solid drummer, to me doesn’t really have a charismatic quality or standout presence. Almost all the songs are of the Slade, Mott The Hoople, T-Rex vibe and dynamism, which is not necessarily a bad thing mind you. The super poppy choruses, the sing-alongs shouts and whoahhs, the hand clippings — it’s all there — so I can see how or why the image compliments the music. There are only a few of the heavier style songs with those being “Bring It On” and “Bloodsucker” — a fave of mine off the album, probably because it is the closest to the Bezerk sound. Both songs I feel would have come across better with a heavier sound.

Now the pros… The album is a bit of a grower. I began to appreciate the album more and more with time and could hear all the cool melodies within the songs themselves. I also really liked the vocal harmonies. Even though the guitar sounds a bit low, Pepper does play well and fits the style well with his playing and with less frivolous glam guitar trappings. New vocalist Robb Wylde‘s voice gives a different dynamic to the band and he is not just being a copy of his predecessors. He puts in a great debut performance with the band. Although, while listening to the album throughout, I kept getting a nagging feeling of wondering who he was reminding me of, but it finally came to me — Todd Griffin from The Graveyard Train. Speaking of different voices, Pepper makes a heartfelt vocal contribution on the song “In The Arms of Mary” which is quite well done. A more subdued but no less moving song similar to “Heaven.”

While bassist Berty Burton has a good showing on the album and his playing can be heard — and granted he does have some big shoes to fill — one thing I appreciated about the band and/or Pepper himself, is that they never seemed to go out of their way to get a copycat Pepsi and/or get some other larger than life character to fill a role. No, they get good solid individuals and let them be themselves and I appreciate that. Another cool surprise for me was the song “Cheap Talk” which is a reworking of a demo song released as a flexi-disc (which I own) in Kerrang magazine (a long time ago, when it was cool, but nowhere near as great as Metal Forces though). I’m just glad they did a bit more of an unknown song and not “Living Without You Part IV.” On a side note, one thing I noticed is how thematically Blast and the prior album Knives are so different. Knives was dark and heavy and ominous, whereas Blast does a sort of about face and is all bright, colorful and upbeat.

All in all, despite my own personal concerns, I feel this is a good follow-up and continuation of the Tigertailz name and I feel the band created a decent musical endeavor that is grabbing a touch from the musical past, a bit of their own past, which they have molded to create a modern good time record that all music fans can raise their hands in salute and have a “Blast” to (sorry, I couldn’t resist). I think Pepsi would be proud.

Reviewed by Will “Bones” Lee for Sleaze Roxx, July 2016

Tigertailz‘s “Pipped It Popped It” video:

TIGERTAILZ – Pipped It Popped It