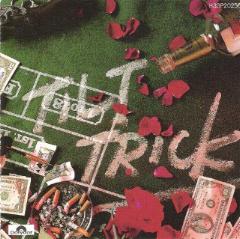 Review:
I love albums like this. Here we have a Japanese band that sings in both English and their native Japanese tongue, yet the vocalist goes by the name of American Cherry! The irony of the situation brings a smile to my face as it becomes obvious that Tilt had a major infatuation with U.S. sleaze metal.

This is by no means a new release (it may not even be that easy to find these days) but it’s worth getting a hold of. Tilt isn’t that far removed from the Sunset sleaze of bands like the BulletBoys, Shooting Gallery and Cats In Boots (in fact Joel Ellis makes an appearance on backing vocals). The group even had the image down pat – lots of leather, hair, alcohol and tobacco.

There is nothing subtle about Tilt Trick as gritty vocals square off with venomous guitar leads (and the odd Steve Stevens moment) and a steady rhythm section. Aside from the mediocre ballad “Who’s Gonna Win” everything on this album rocks with reckless abandon. The steady drum beats lays a solid foundation for “Take me Back” and the mispronounced chorus of “Blue Jean Queen” makes it impossible to not enjoy. Half the time I can’t understand what the hell Tilt is saying and the parts I do understand are so corny (like this lyrical gem from “Come And Taste”; “Come taste my poison, I’ll give you all tonight”) that I can’t help but liking it. Suddenly I have the urge to discover more Japanese sleaze bands, I’m sure there are several like Tilt that flew under the radar.