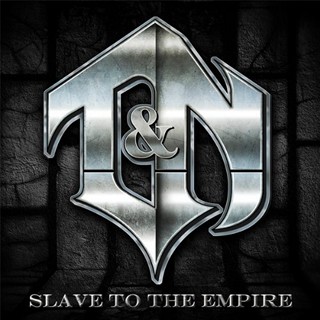 Review:
Former Dokken members George Lynch, Jeff Pilson and Mick Brown have reunited without band namesake Don Dokken in a new project called T&N. Previously called Tooth & Nail, the band were forced to changed their name due to an existing party that had trademarked the moniker. The group’s debut Slave To The Empire consists of newly penned material with Lynch on guitar, Pilson on bass/vocals and journeyman drummer Brian Tichy and there are also newly recorded versions of Dokken classics with Brown on drums and special guest vocalists.

The new material has the distinct Dokken sound with a modern twist to it. The standout among the new tracks is “Jesus Train”, a groove rock meets melodic rock meets boogey number. Those that have followed Dokken over the years are fully aware that Pilson can sing very well, but while the new stuff is good the real treat here are the guests that tear it up on the Dokken classics. Doug Pinnick of King’s X delivers a barn burning version of “Tooth And Nail”, former Lynch Mob and current Warrant singer Robert Mason‘s edgy rendition of “It’s Not Love” hits the spot, Tim ‘Ripper’ Owens slays on “Kiss Of Death” (destroying everything in its path), Pilson himself tackles “Into The Fire” with ease while staying true to the original, and Sebastian Bach blows the door down and your ear drums with his rendition of “Alone Again”.

Overall Slave To The Empire is a respectable effort by a group of great musicians that are carving a new path in the ever changing rock scene — while sticking it to their former frontman at the same time. The new material might not match the level of ‘classic’ Dokken, but it’s as close as we’re going to get in 2012. Slave To The Empire is worth investing some coin in for the reworked Dokken tracks alone.