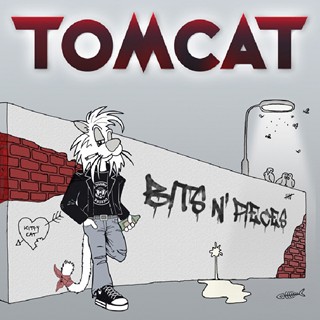 Review:
TomCat‘s debut album Bits N’ Pieces could not be more appropriately titled, as it feels like the Slovenian rockers have thrown bits and pieces together for most of these songs. The results are a mishmash of different styles and sounds during each and every track. This is probably the longest it has ever taken me to get a CD review done, simply because I don’t really know what to make of TomCat‘s debut effort.

Bits N’ Pieces sounded promising when the opening guitars of “Hangover” reminded me of the simple riffs that can be found on Poison‘s “Look What The Cat Dragged In”. I also enjoyed lead vocalist Denis Jambrosic‘s rough vocal delivery, but the guitar solo seemed a little out of place and anti-climactic throughout the rest of the song — a better and more bombastic guitar solo would have really lifted the track. “Goodbye” is alright, with a melodic and pretty enjoyable solo kicking off the song, some slower but catchy verses, and a chorus presumably featuring the harmonies of guitarist Rok Barle and bassist Gregor Sujica. Once again though, the guitar solo in the middle does not fit well with the rest of the song. The third track, “Dirty Old Mind”, is pretty straight-forward and simple — but it works. Unfortunately, little did I know that I had just heard the three best songs on the CD.

The rest of TomCat‘s debut goes from alright to just plain bad. I had a hard time getting through the entire album for the purpose of this review — and I tried on three different occasions! Most of the songs follow the same pattern, in that I like some bits and pieces of them and dislike the rest — and overall they feel subpar when compared to a lot of the other releases that are coming out these days. For example, the ballad “Follow You” has some nice slow guitar melodies but singer Jambrosic does not have the voice to carry the song. I like the chorus and melody of “Girl In Leather” but find the rest is not very compelling, while “Stevie, Annie And Me” sounds like a throwaway B-side.

In short, one listen of Bits N’ Pieces would have been plenty for me. Aside from the first three songs, there are not enough good ‘bits and pieces’ on TomCat‘s debut to entice me to listen to it again.