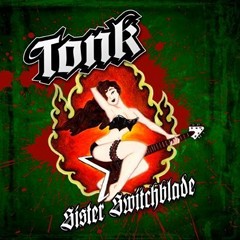 Review:
Coming out of Australia with possibly the best name for a band EVER, it is to Tonk‘s credit that they sound nothing like either AC/DC or Rose Tattoo… well, maybe just a little bit. Having said that, I rather wish they did to be honest, because although competent musicians and possessing a singer with a serious set of pipes, Tonk seem to have forgotten to attend the ‘How To Write Memorable Songs’ classes.

Sister Switchblade kicks off with “Redback” — two minutes and fifty seconds of perfect album opener, big chords, great solo… the works. The three following tracks, “Menage A Trois”, “Golden Girl” and “Libertine”, are just plain hard work to sit through. The band seems to lack direction, and most importantly of all, have left any semblance of a hook back at the rehearsal room. But, and it’s a big but, just when things seem to be going awry up pops “Sister Switchblade” — without question the standout track of the album. The spirit of Bon Scott runs riot through this song and the whole feel of it is 100% Powerage.

It is this inconsistency that is really frustrating because Tonk are not a bad band, not at all. The guitar work of Steve Gray and Wayne Withers ticks all the right boxes as far as I’m concerned, and there are some genuinely great moments on this album, but it’s just bloody hard work to find ’em. The old adage of ‘all killer, no filler’ seems to have been misread by this lot and turned on its head.

“Looze Your Load” offers a brief respite from the audio mogadon, but by the time you’ve got there it’s too late.
I wanted this album to loosen my fillings, to excite me the way that finding your missus standing over you in the bath with a plugged in toaster would — but ultimately it’s like having sex when you’ve had far too much to drink; everything’s ok and exactly where it should be, but you just can’t feel anything and you fall asleep before it’s over.
Now, where’s my copy of Powerage?