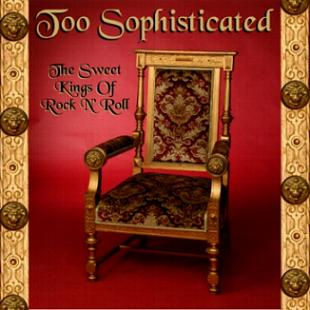 Review:
Too Sophisticated…hmmm. Sophistication has never been a requirement (or for that matter wanted) in the world of sleaze metal. Let’s hope the band name is misleading and not just another crappy album that has as much to do with sleaze as Rosie O’Donnell does to sexiness.

Thankfully the band isn’t as bad as the name led me to believe. When the opening riff of “I’m Loose” hit, my mouth dropped – this sounds great. Then the singing started, and my mouth dropped even further – this doesn’t sound so great. The group seems to be going for a revved up Dogs D’amour sound, but sadly vocalist Sativa Sunrise isn’t even in the same ballpark as Tyla. In fact Sunrise is the weak link for Too Sophisticated. Many times he sounds out of tune or just too damn whiney. Being from Finland he has one of the most pronounced accents I’ve ever heard – I have albums by Japanese bands that sing in Japanese and still sound more English then this!

The music itself isn’t half bad, even if it wanders a bit too deep into the punk trenches at times. However I just can’t get past these vocals and am even having a hard time thinking of comparisons – Tyla meets Taime Downe on a bad hair day perhaps? “I’m The Sweet King Of Rock N’ Roll” even sounds like a supercharged version of Donovan‘s “Mellow Yellow”. Donovan is the sweet king of rock…who knew? It looks as if I’m not sophisticated enough for these guys, if you think you are head over to www.saunalahti.fi/~araiski.