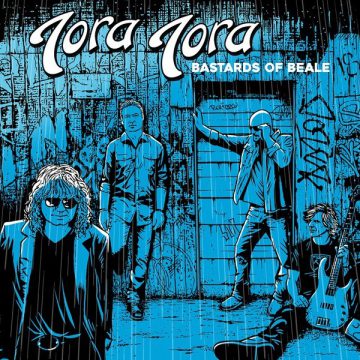 Review:
You’d think that 25 years after their last studio album (when Revolution Day was supposed to be released), the Tora Tora band members might have changed their sound a little bit but Tora Tora‘s fourth full-length studio album Bastards of Beale is a logical extension from Revolution Day and there is no denying that the Tora Tora sound is still there. Then again, there is apparently something magical that happens when the four original Tora Tora members — lead vocalist Anthony Corder, guitarist Keith Douglas, bassist Patrick Francis and drummer John Patterson — get in a room together as both Douglas and Corder have advised Sleaze Roxx in recent separate interviews.

While Sleaze Roxx writer Tyson Briden felt that a review of Bastards of Beale was not warranted given that the album could simply be summed up as “fantastic”, I will step up to the plate since one word album reviews simply aren’t enough to give you a flavour of what an album is all about. First off, you should know that I have been a big fan of Tora Tora ever since I heard their debut full-length album Surprise Attack way back in 1989. It’s still in my mind one of the great debut albums of all-time. Wild America was a more bluesy affair but still had some catchy tunes such as “Amnesia.” Revolution Day, when it was eventually released by FnA Records in 2011, had Tora Tora go in an even bluesier route and unfortunately, although the songs were good, there was nothing that truly stood out like on Surprise Attack or Wild America aside from perhaps “Mississippi Voodoo Child.” Bastards of Beale has a real live feel to it, and particularly the drums, and as Corder explained in his two part interview with Sleaze Roxx, this was done on purpose.

As previously mentioned, there is no question that Tora Tora have retained their classic sound and they are one of only a handful of bands from the ’80s to release more than three albums while always retaining their trademark quality sound. I find Bastards of Beale to be kind of in between Wild America and Revolution Day in that it is a peppier affair than the bluesy Revolution Day but it does not have the catchiness of some of the songs on Wild America. No need to say that the new songs are nowhere close to the many anthems that can be found on Surprise Attack. That being said, there is a real swagger to a lot of the songs on Bastards of Beale and as a whole, the album is very enjoyable to listen to. There is however no standout track like a “Guilty” or “Walkin’ Shoes” to really propel the album to be an “album of the year.”

I have to say that I am quite impressed with the musicianship on the album. Douglas‘ guitar playing in particular is very good with some solid guitar riffs and solos. Corder, unlike many of his contemporaries, has kept his voice in fantastic shape and he sounds just like he did 30 years ago. The rhythm section of Francis and Patterson is solid on Bastards of Beale and allows Corder and Douglas to shine. My favourites on the the album are “Son of a Prodigal Son” (which reminds me a bit of the Tragically Hip), the peppier “Everbright”, “Giants Fall” despite its underwhelming chorus section, and “Rose of Jericho” which is probably the biggest throwback to Tora Tora in their heyday. Two songs that I could do without is the ballad “Lights Up The River” and the instrumental “Vertigo” which feels more like a jam than anything else.

Tora Tora have delivered a solid album in Bastards of Beale, which will likely grow on you each time that you hear it. It’s great to get some new material from the guys after all those years (the various CDs of demos / unused tracks via FnA Records released back in 2009 tided me over and reminded me how much I liked the band) and I can’t wait to finally get to see them play live later this month!

Subscribe here for more videos – http://radi.al/SubscribeFrontiers | From the album BASTARDS OF BEALE. Get your copy NOW: http://radi.al/bastardsofbeale | L…

Subscribe here for more videos – http://radi.al/SubscribeFrontiers | From the album BASTARDS OF BEALE. Get your copy NOW: http://radi.al/bastardsofbealeFoll…