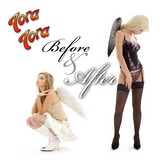 Review:
Is there anyone that doesn’t like Tora Tora? I remember discovering this band in high-school, taking the cassette to a party and finding that they were pretty accessible – even the popular chicks were able to dig it (or did they just say that because they were drawn to my charm?). Regardless, the band is back… kind of. Before & After is the third of FNA Record’s new Tora Tora releases and it contains the band’s impossible to find To Rock To Roll indie tape and demos from their unreleased third album.

So what we have here is a CD that represents the beginning and the end of Tora Tora‘s too short career. The first six songs come from To Rock To Roll, three of which surfaced on the group’s 1989 debut Surprise Attack. Of the three songs that never made it to the major label debut I can understand why “Wasted Love” wasn’t included, as it is pretty standard fare, but “To Rock To Roll” and “Time On The Edge” would have fit perfectly. The latter was probably cut because it has a similar feel to “Phantom Rider”, a song that sounds as great on Before & After as it did on the debut.

After “Love’s A Bitch” and the band’s biggest hit “Walkin’ Shoes”, both of which sound pretty close to the renditions we remember, the disc shifts onto Tora Tora‘s lost recordings. The foursome had recorded demos for what would have become their third album when the musical tides shifted and the work was shelved. Often referred to as Revolution Day in trading circles, Before & After represents the first time any of these demos have been officially released.

The songs definitely showcased a more mature Tora Tora, but one that wasn’t that far removed from their humble Memphis beginnings. “That’s Not the Way Love’s Supposed To Be” is pure Tora Tora, a great up-tempo rocker that fits perfectly within their catalogue. “Blue Tomorrow” on the other hand just limps along and “Better To Have Loved Than Lost” is an only slightly better ballad. The final track, “Something’s Got To Give”, finds the band getting back on track, but really doesn’t rival the first seven songs on this CD.

Putting out three Tora Tora CDs at once, when they had only released two during their heyday, may be a touch excessive but these guys have always been one of my favorites, so any extra material is welcome in my eyes. When it comes to Before & After I prefer the ‘before’, when the band was young and hungry as it brings up so many great memories of my youth. If this CD included just the six song To Rock To Roll EP I would have recommended it (as well as the other rarities collections Bombs Away and Miss B. Haven’), the unreleased tracks are simply icing on the cake.