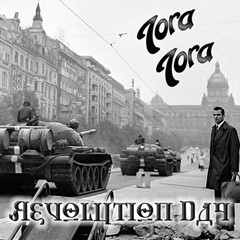 Review:
When I first discovered the vast world that is the internet over a decade ago MP3 trading was in its infancy. In those days music lovers had to befriend other like-minded individuals and use ‘snail-mail’ to get their hands on rare recordings. One album that seemed to elude everyone was Tora Tora‘s Revolution Day — it was if this collection of songs were sealed in a tomb and lost forever.

Originally recorded as the follow-up to 1992’s Wild America, the influx of grunge led to Tora Tora being cast aside as has-beens and Revolution Day itself being shelved until now. 1993-94 was a strange time for ’80s hard rock bands — the majority of groups discovered how Dinosaurs must have felt as they also became extinct while a few others stumbled over their own feet in an attempt to stay current during a musical climate that had abruptly made them irrelevant. Tora Tora fit into the first category, but not before working on Revolution Day — an album that was the logical continuation of the sounds being explored on Wild America.

While hard rock was still their driving force, during these sessions Tora Tora further explored their bluesy southern roots. The result is another great addition to the Tora Tora catalogue — although it leans far closer to Wild America than the scorching debut Surprise Attack. Staying true to the original rock concept are numbers like the straight-ahead heavy hitter “Mississippi Voodoo Child”, “Little Texas” and “Out Of The Storm”. On the lighter side are “Candle And The Stone” and the exceptional “Shelter For The Rain” — the later rivals “Mississippi Voodoo Child” as the best track on the CD — while expanding the horizons a bit is the thumping horn infused soul number “Memphis Soul”.

As shown on Revolution Day, a mature Tora Tora isn’t a bad thing. While they were always closer to Tesla in sound and look than hair-metal bands like Poison, on this album the Tesla comparisons are more evident than ever. It took a long time for this CD to see the light of day, but if it becomes the catalyst for a Tora Tora rejuvenation today it was worth the long wait!