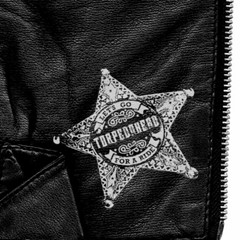 Review:
Forming in 2008, Germany’s Torpedohead have wasted little time in releasing material — first with the full-length Lovesick Avenue and now the follow-up EP Let’s Go For A Ride. Not much has changed between the two albums aside from a better production and a slightly more commercial direction being displayed on this new EP.

Torpedohead are always at their best when they crank up the guitars as they do on “Brave New World” and “Moonshine Highway”, two songs that work well thanks in part to their intensity. I especially like the guitar riffing on “Moonshine Highway” and the song rivals “Wall Of Love” from the band’s debut as their best composition to date. The lead single “Cadillac Beach” is as commercial as the band gets (dare I say alternative at times?), but the simplistic punk overtones of the song don’t really showcase the band’s strengths. “Black Rain” on the other hand finds the group visiting their ’70s influences for some half decent retro garage-rock. Wrapping everything up is the laid-back “Paintrain”, a song that really doesn’t go anywhere but it does showcase Sven Spacebrain‘s hoarse yet whispery vocal delivery.

The same thing that plagued Torpedohead on their debut can be seen here as well, and that is a lack of consistency. When these German’s are on their game they deliver some great ’70s inspired rock like that of Gilby Clarke and a heavier Spiders & Snakes, but when their punk and alternative influences take center stage I’m not as impressed. Torpedohead do show signs of brilliance however and one day they will harness it all into one killer album!