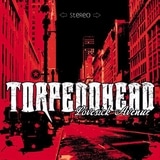 Review:
From the ashes of Nasty Riot (who released an EP back in 2006) come Torpedohead. Hailing from Germany, these guys have transformed not only their band name but also their sound, from sleaze to 70s inspired riff rock. To my ears Torpedohead sound like a cross between Backwash, Enuff Z’Nuff and The Dogs D’amour, although a bit heavier than the later two.

Lovesick Avenue works for a couple of reasons. One, the group have a good feel for rhythm and lay down a steady and infectious beat the majority of the time. And two, vocalist Sven Spacebrain has the perfect voice for this type of music with just the right amount of grit and a feeling that it is on the verge of cracking at any moment. Those two elements combined make for an entertaining CD, one that doesn’t really offer anything new yet sounds unpretentious and straight from the gut.

The first two songs on the disc, “Wall Of Love” and “Brand New Sinsation”, capture Torpedohead‘s sound perfectly. “Wall Of Love” especially, recreates a torrid 70s sound on the brink of spinning out of control and makes for a great opening track. The other stand-out tracks are “Love Rocket”, “Spacequeen” and a completely revamped version of Elvis Presley‘s “Burning Love”. If you like things on the slower and moodier side, The Dogs D’amour influenced “The Devil Inside Her Eyes” and “Ticket To The Moon” may be just what you’ve been looking for.

My biggest complaint is the choice of “Broken Flowers” as the first single and video. I’m not sure who decided that, but it is about the only song on the album that doesn’t flow effortlessly, instead it is choppy and doesn’t really display the group’s true talents.

My copy of Lovesick Avenue states that it is limited to 100 copies – if that is the case, finding this album in the future may be difficult. My suggestion is you buy it now, relax and step back into the early 70s with Torpedohead.