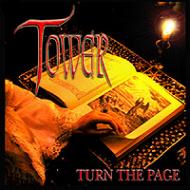 Review:
Usually a four-octave range means the listener is going to be bombarded with high pitched wails that serve no purpose other then to show off a vocalist’s pipes. Thankfully Tower/Joshua Perahia vocalist Jerry Gabriel realizes that there is no need to reach pitches only audible by dogs, and to focus on the actual songs instead. With his combination of David Coverdale and Geoff Tate, he has helped Tower release an exceptional melodic album.

“I’d Give You My Life” starts things off with an over-the-top majestic rocker, showcasing Mike Robson and Chris Tanaka‘s experimental guitar dueling. “Love Is Not A Sin” is a groovy (with a haunting guitar) rocker that sets things up perfectly for the beautiful ballad “Rain”. “Rain” shows how powerful Gabriel‘s vocals actually are, as he explodes with emotion. “I Wanna Know Why” has a Bonham feel at times, with so many different sounds being incorporated into the mix — while the ballad “My Heartache Ways” reminds me of XYZ.

A couple songs are too funky for my liking, and don’t really seem to fit with the rest of the album. But overall Turn The Page is a great release — dark, haunting and melodic. For more information visit Tower‘s official website or Front Row Seat.