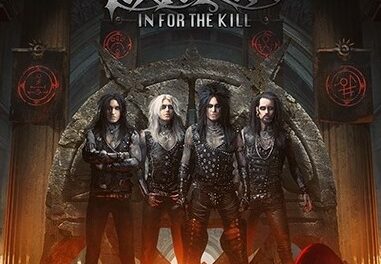 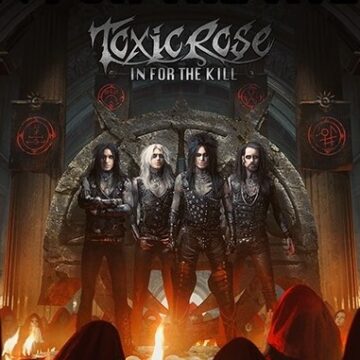 TOXICROSE
IN FOR THE KILL
To be released on September 24, 2021 (Crusader Records)

Review:
Sweden’s ToxicRose return to the fray with their first album since 2016’s Total Tranquility and in that time have recruited new bass player Johannes Sandberg and apparently been preparing for “world domination” — according to their social media sites and their press-kit,  anyway.

So how is that declaration working out for them with the release of In For The Kill? Well, the dramatic intro to opener “Blood On Blood” then turns into a full on grunge assault with a loud infectious chorus and suitably snarling vocals from Andy Lipstixx. “Heroes” continues in a similar style with a gang style chorus and a fine solo from Tom Wouda. Title track “In For The Kill” has a really sinister overall feel to it with a quite menacing vocal and yet more fine guitar work.

“Remedy” seems unclear as it veers between pop-metal style chorus and — shock horror — a little prog meandering in the middle  making an unwelcome appearance for me. “Angel” begins equally uncertainly before launching into a rather melodramatic seven minute epic that encompasses just about any rock genre going. It’s sprawling but not uninteresting, due mainly to the fine delivery of the entire ensemble. The same can definitely be said of “Outta Time” and their current maxim “Domination”, by which time the epic style is beginning to wear just a little thinly for me.

“Open Up”  and “New Breed” are all once again finely played with dramatic choruses but the seeming concept within a concept of the album means that the tracks are often indistinguishable from each other by this time — although closing track “The Great Escape” does at least throw in some “Woa-ohs” in a rather belated attempt to inject some fun into the proceedings.

So have ToxicRose succeeded in their first foray into world domination? Well, yes. If you like dark nu-metal with an epic slightly progressive tinge amid a concept of being at war with the devil, then they have taken those first tentative steps towards that goal.  Personally, despite the smart production, the fine playing and quality vocals from Lipstixx, I was left more than a little disappointed.