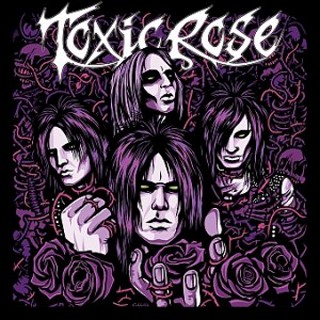 Production:
Produced by Martin Sweet and ToxicRose.
Mixed and mastered by Ronnie Bjornstrom.

ToxicRose haven’t been advertised as a super group, but in the world of sleaze rock they should be. With current and/or ex-members from Gemini Five, Lipstixx N’ Bulletz, and Sexydeath represented, this band attempts to harness a lot of styles into one sound. For the most part, ToxicRose has accomplished this feat.

The first song, “Song For The Weak”, is a great tune and the perfect way to kick off this EP. I ended up listening to these songs in reverse order so I really appreciated this song. The vocals are chilling, the guitars grooving, and the lyrics are dark — everything this band does well is on display in the opener. This song, along with the following “Set Me Free”, are, in my opinion, the strongest because they are the most basic. Big guitars, fast and dirty choruses, and an attitude that comes across as a whole, gives ToxicRose a distinguished sound on these two tracks.

The EP’s remaining tracks, “Follow Me”, “Black Bile”, and “Fear Lingers On”, are all fine, but sound more like a band heavily influenced by early Crashdiet — which is understandable considering Crashdiet guitarist Martin Sweet produced this EP and his younger brother Michael handles the drums for ToxicRose.

For me, I really dig the sound of ToxicRose‘s first couple of songs on this EP and can’t wait to hear a full-length album from the band.