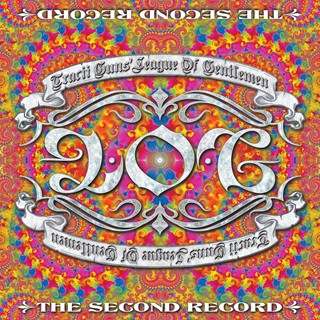 Review:
Racism, green peppers and covers albums are three things that don’t sit well with me. I’m sure re-recording and reliving songs that were the soundtrack to your youth is incredible fun in the studio, but as an entire album concept it reeks of a musician that has run out of fresh ideas. When I blasted L.A. Guns‘ horrendous Covered In Guns compilation back in 2010, their former bandmate Tracii Guns sent me an email simply stating “I am embarrassed”, and yet here we have the guitarist offering a collection of covers with his latest band League Of Gentlemen.

While The Second Record is more cohesive than the patched together Covered In Guns, the end result is much the same — albums that are best avoided. I just can’t imagine readers of this website being able to sit through fourteen songs of flower-power nonsense — and in all honesty that is exactly what this is, regardless of how well it is executed. Playing this album is like sitting through one of those Time Life or PBS infomercials where they parade geriatric one-hit wonders on stage to sell an overpriced boxset filled with songs you remember performed by artists you don’t. Usually when I have those programs on the TV my mind is elsewhere and the show becomes nothing more than background noise — exactly like The Second Record.

At its best, such as “Sunshine”, Tracii Guns’ League Of Gentlemen drift straight into Enuff Z’Nuff territory, and at its worst, the female fronted “Eeny Meeny Miney Moe” and “White Rabbit”, your sides will split in laughter. Psychedelic is obviously the word of the day here, but unless the band members were dropping copious amounts of acid during the recording process its practically inexcusable. I have to admit I enjoyed portions of The First Record yet I’m pretty sure whatever momentum it generated (admittedly not much) has been wiped clean this time around. I can’t remember how much this CD cost me, but unless Tracii Guns reaches into my wallet and personally deposits a twenty dollar bill I’ll feel as if I overpaid.

Who the hell will this album appeal to? L.A Guns fans who grew up on “Sex Action” and “Never Enough” won’t be interested, and if the long dead ‘love generation’ are keen in revisiting their drug induced youth chances are they will seek out the original recordings. Alice Cooper always claims he was the one that ‘drove a stake through the heart of the love generation’, and League Of Gentlemen certainly aren’t going to be the band to revive it. Ignore this one and hope for better results from Guns‘ Devil City Angels project because I just can’t figure out the purpose of The Second Record. Any day now I expect to receive an email from Phil Lewis or Steve Riley containing the words… “I am embarrassed”.