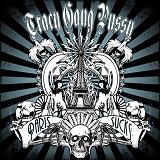 Review:
Wanted! Lead guitarist. BADLY! Must have a knack for fills and solos! We are an established band with three releases, the latest being Paris Sucks!. Unfortunately for us that’s not the only thing that sucks… After we land the new and easily improved lead axeman, we will be re-recording Paris Sucks! and releasing it as an EP. That’s right, an EP. Dropping the very unimaginative, mundane, second rate Offspring b-sides that currently bog this album down and cling ever so tightly to the five moderately acceptable, bordering on fair to midland sleaze/rock tunes on our disc.

By adding some much needed quality lead guitar work and a little song restructuring (so many unimaginative and quite lengthy, pointless breaks) these five tunes could be great; “She Said” is a good attempt at a hard rock song, but they need to lose the break and of course add a solo. “Secrets And Lies” can lose the break and add a damn solo! “Live My Life Alone” would be saved from oblivion if a solid guitar solo was added. “Can’t Stop Rock N’ Roll”, again, could be a winner if it was given some decent guitar solos and was stretched out a bit. And finally “I Want It All”, the best song by far, but a better solo would make for a better song…is there a theme here!?

Then who knows where we will go, maybe we will be so enlightened by our ability to put out a quality recording that we won’t feel the need to hide behind made up names (like 8Balled and Suicide) to keep people from recognizing us. The songs will be so much better that we should be able to show our faces in our home town again!