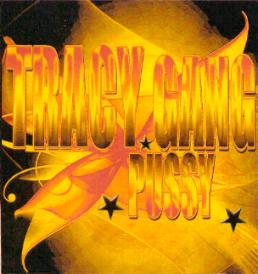 Review:
Tracy Gang Pussy‘s mini CD is limited to 150 copies and claims to be recorded by a “100% sleazy glam punk band.” After spinning the disc a few times, I have no problems agreeing with that statement. Try to picture the Sunset Strip sound of bands such as Sick Sexx and Alleycat Scratch with a festering case of rabies, and you should get an idea of the aggressive punk-sleaze sound of Tracy Gang Pussy.

The opening track is appropriately titled, as the band really does come across as “Pissed” when vocalist Regan shouts, “I don’t like the way you are” over a noisy rhythm section. The remaining songs show the Paris band’s fascination with the Strip sound, without appearing vain like several bands from that era did. Tracy Gang Pussy can be found reliving the glory days at their website.