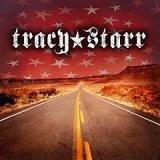 Review:
When reading this Canadian band’s press pack it states that Tracy Starr songs ‘make you want to drive fast’ and they are not lying. This band’s self-titled debut album is full to the brim with hard-hitting rock songs providing us with some classy guitar riffs along the way.

Tracy Starr blasts through opening track “Yellow Rose” then moves on to the first single and the highlight of the album “Ride”. Reminding me very much of Velvet Revolver, “Ride” is a reminder to us all that hard rock is still very much alive, complete with hard-hitting choruses and shredding guitars.

Although powerful throughout, the second half of this album does not really see any change in formula and becomes a bit predictable. I feel that if this album was condensed into ten tracks that it would have just continued the edge that the band demonstrates on the CD’s opening few tracks.

Nonetheless, Tracy Starr are a band that should not be ignored and with their debut release there is really very little chance of that happening. If you’re in need of some heavy hitting music to drive at high speeds to then this CD is for you!